the database state and a modest proposal 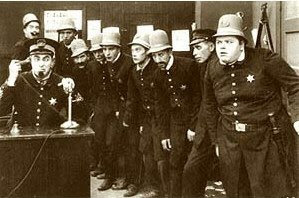 Occasionally - okay regularly - the powers that be come up with something that is beyond parody or frankly beyond belief (except that the lunacies emanating from the mouthpieces for the insolence of office are all too believable). A Gary Pugh, who is apparently director of forensic sciences at Scotland Yard and the new DNA spokesman for the Association of Chief Police Officers wants a debate on his spiffing wheeze. His spiffing wheeze is fairly near the 'arrest everyone at birth' parody of governmental approach to criminal justice. Mr Pugh is extremely interested in making primary school children eligible for the DNA database if they exhibit behaviour indicating they may become criminals in later life.
Jailhouse Lawyer (link to left) has flagged up this story. He has a two word comment. I agree. But let's think about this. Primary school children? That would include those below the age of criminal responsibility? These children need not have committed a crime but nonetheless are adjudged to be potential criminals - by whom and on what basis? Is such an adjudication to be subject to any challenge? Are teachers expected to be police informants as regards their charges, in respect of whom they are supposed to be in a relationship of trust? As a ten year old cannot give meaningful consent to this exercise, then who is to give consent? The parents? What if the parents refuse? Are they to be subject to some sort of criminal sanction for refusal? If there is no parental consent or resistance by the child can force be used to take the sample? If so, what degree of force? Who is to know of the taking of the sample? The child's teachers? All of them? The local education authority? Everyone within a fifty mile radius?
A modest proposal: why stop at DNA samples? I recently was looking through ledgers recording proceedings at the Old Bailey in - if I recall rightly - the 1740s. One interesting feature was the use of branding. So why not bring back branding for these primary school non-offenders? Maybe FC (Future Criminal) on their foreheads, Oh - and an asbo prohibiting them from growing a fringe thereby disguising the branding.
Memo to the powers that be: I am being sarcastic. Do not take the modest proposal seriously.
Please!!!
Posted by white rabbit at 19:18

One of the things I used to object about the Parole Board, is that the panel refused to direct release based upon what the panel members thought the prisoner might commit in the future. Thought crime.

I don't suppose the likes of Aitken and Archer displayed in childhood how they would turn out as adults?

I linked to your blog.

Considering some who comment on blogs, atleast at mine, you do need a sarcasm warning notice. Orwellian is good word to describe the story that got away on most blogs.

I don't know what any of that stuff meant, but its sounds pretty bad. :)

Why not allow Sharia Law to handle all this? Cut off their hands! Infidel pigdogs!

Wow, this is extreme--sounds like something J. Edgar Hoover woulda thought up, back in the day. (Good thing he never got a chance to learn about DNA!)

Thank you so much for linking me! I linked you back! :)