'The creatures outside looked from pig to man, and from man to pig, and from pig to man again; but already it was impossible to say which was which' as Orwell had it in Animal Farm. It occurs that the rabbit mentions Orwell quite a lot. This is a sign of approval, but I digress. The line came to mind on viewing - with Hat Tip to Charon QC - the above clip of some naughty Australian satirist taking the - erm - rise out of a person named Lord Monckton, a man so bizarre that it is hard to tell who is the satirist and who is the satirised.


There are a number of things to note about Lord Monckton.

Firstly, yes - he does look like that.Secondly, Lord Monckton is a prominent member of UKIP. For the benefit of overseas readers, UKIP - the United Kingdom Independence Party - is a particular rabbit aversion made up as it is of petty nationalists, xenophobes, saloon bar bores, all manner of obsessives and - how does one put this delicately? - self pleasurers.

Now our man has a number of odd claims to 'fame'. One is that he is the only person in the entire history of everything to have copped a 'cease and desist' type edict from the House of lords telling him to stiop claiming that he is - or ever has been - a member of the House of Lords. Yes, he's a 'Lord' but...

So that would explain it. He has also been told to stop using the House of Lords logo (left) so our man uses the logos centre and right instead. Isn't there some concept of 'passing off'?

Even weirder, his UKIP profile (he is head of Scottish UKIP and of policy development, which is nice) lists among his achievements '2008 Inventor, cure for Graves’ Disease (100,000 UK sufferers) and other chronic infections'. Graves' Disease is - it transpires - an auto immune disorder that leads to overactivity of the thyroid gland. The catch is - he has not invented a cure for Graves' Disease - only he - and apparently UKIP - believe he has done any such thing. There is no cure for Graves' Disease.

Oh and the rabbit was amused to notice among his lordship's interests as per his UKIP profile was...

Which is nice. What a pleasant relief after all this weirdness to see that Christine O'Donnell has written again. Now what tendresses may pass through cyberspace between the rabbit and Christine is nobody else's business but I'm sure I betray no confidences if I quote selectively..
'Dear Andrew,

While running errands at my local Target Friday night I was unexpectedly contacted by ABC News asking me about my personal political contributions in the 2012 GOP Presidential Primary. This seemed to cause a bit of a stir, so I am writing to you directly to share my thoughts on the upcoming 2012 elections...'

Very thoughtful I'm sure but what exactly is Christine's local Target? Must be an American thing...

'I contributed to Gov. Romney, Herman Cain and I plan to personally contribute to Sen. Santorum and Speaker Gingrich. Let me clarify that these contributions are from me personally, not my campaign or PAC'.

So there we have it. Christine has contributed to the Mormon one and the bloke with the pizzas or burgers or whatever it is. I'm a bit surprised at Christine spreading her largesse so widely as she invariably seems hard up and keeps asking the rabbit for money. I can only conclude that the candidates so favoured by Christine must have a sound line on - erm - UKIP's favourite activity, something that Christine takes a dim view of. Below is Christine taking a dim view of... Oh never mind. 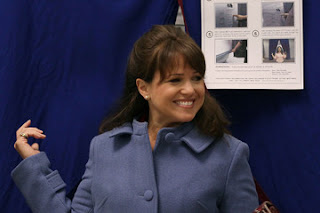 Ending where we began, with Orwell and Animal Farm, it is not as widely known as perhaps it ought to be that in one of his most disgraceful moments, rabbit fave poet T.S.Eliot as director af Faber & faber (publishers) rejected Animal Farm. In a letter from 1944 explaining why he would not be publishing the work, Eliot told Orwell that he was not persuaded by the 'Trotskyite' politics which underpin the narrative. To publish such an anti-Russian novel would jar in the contemporary political climate, explained the poet.

Eliot had been leant on by the men from the ministry. There was a war on and Marshal Stalin was our friend. The fact that he was a yellow eyed mass murdering psychopath was not to be the subject of satire in the public prints. 'We have no conviction ... that this is the right point of view from which to criticise the political situation at the present time. It is certainly the duty of any publishing firm which pretends to other interests and motives other than mere commercial prosperity to publish books which go against the current of the moment' wrote Eliot.

Eliot then goes on to say that he was not convinced that 'this is the thing that needs saying at the moment'. 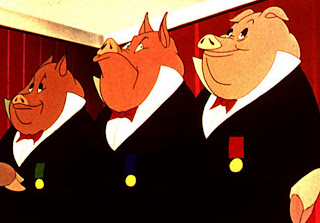 My favorite type of post: mocking politicians. Claiming a cure for Graves' Disease? That's a bit like claiming the creation of the Internet (Al Gore).

Target is a large chain of department stores, similar to WalMart, but catering to hip, young families.

I didn't know about T.S.Eliot refusing to publish Animal Farm. You're always so informative as well as amusing.

I like the house of lords logo and the ones next to it. They remind me of quilt designs.

Oh, Rabbit - you have to promise not to go into hiding again - I've missed you!!
Lord Monckton's logos look a lot like the Bejeweled game. Makes perfect sense, actually.

Catchy - as regards a cure for Graves' Disease/claiming the creation of the Internet, perhaps His Lordship should be put in charge of sorting out the British weather. Everybody complains but no-one does anything about it.

JoJo - Go for it! You got da gift - House of Lords quilts. Nice!

Sybil - You are of course quite right.

Tony - Oink! Seriously, Orwell was never a Trotskyist despite Eliot's comments. He was a libertarian of the left. taht's why i like him.