Just because you're paranoid...

After yesterday's message from Mr Damian Omen, the Tea Party disappoints today with a message from their friends from Americans for Prosperity - the message is 'tell Washington to cut spending' not 'get down in your cellars and prepare for armageddon'. Very dull, I have to say. C'mon, shape up Tea Partyers!!!

So the paranoia baton has fortunately been picked up elsewhere as revealed by Tony in his most excellent blog.  Here is a list of 'must have' items for the paranoic who likes to keep up with the Joneses - I'm not sure quite which is my favourite - probably The Evacuchut, but if I were a woman I'd love scaring the crap out of every man in a 200 mile radius with the Rapex Rapist Dick Destroyer. Every home should have one...

And today's music? Well it's a no brainer really.

Oh and also following from yesterday's posting here is the New Riders of the Purple Sage's version of Long Black Veil. Johnny Cash and Dylan also recorded it among others but I think this version by their very stonednesses is my fave.

What's more and with Hat Tip to Laci the Dog, here is The Framley Examiner a spoof online version of a local newspaper which induced giggling fits verging on mild hysteria in the rabbit's case (follow the link - don't risk a ruptured eyeball trying to read the sample page below). Okay, if I had to nominate one favourite it would be the small ads page which literally had me in tears of laughter. 40 gallon drum of owls??? Enjoy! 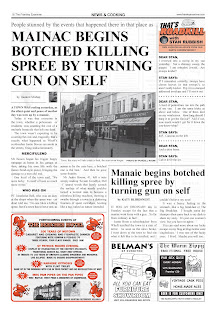 You follow the Tea Party? I'm so confused. I thought you were a lawyer in London. That's like trying to follow Falun Gong from Baton Rouge, Louisiana and understand what they're all about. Anyway, now we have the great-grandchildren of the hippies protesting in New York City as a kind of anti-Tea-Party movement, complete with naked stoned chicks and lots of Woodstock-like atmosphere. You'll never get that kind of naked, drug-abusing excitement from a Tea Party rally. They're all mid-aged or older and far too sedate for that.

Steve - It's more like that the Tea Party follows me - follows in the stalking sense. I am indeed a lawyer in London and it's all Christine O'Donnel's fault. You can go off people. I've noticed the anti-Tea Party thing - naked stoned chicks sounds a huge improvement on the Tea Party - Hiram J Whackjob and all...

The Tea Party scare me! Slightly to the right of Hitler and to the left of Lenin....America will be one scary place if they get in. And so will the world!

Was 'maniac' misspelled as 'mainac' and again as 'manaic' on purpose?

My preferred version of 'paranoid' is the one by the Dickies.

Just for curiosity's sake, where does one purchase a Rapex Rapist Dick Destroyer?
Also, the repeated misspellings of maniac drove me insane, intentional or not!
Paranoid makes it all better, though.

Good to see you back.

I hope you are not expecting anything intellectually challenging, creative or stimulating in any way from the Tea Partyers.... They are all dim witted narcissistic boobs.

I'm just glad your back, and well. You are well, aren't you?
peace,
pf

Oh, yea... I almost forgot about the famed "Dick Destroyer"... why no link to that? hee hee!

Also, I will be occupying here locally tomorrow. I will be clothed though. Early childhood Catholicism forbids. But there maybe other nekkid folks, although we are in the deep south. I'll keep you posted.

The Framley Examiner is most excellent!!
I am making enquiries about the Sexy Thigh Length Desk AND the Dyson Plastic Oven. And the Full lenth cutains with deleted seams [decorator's cut].
Sx

Have added a link to the Framley Examiner on my blog.
Many Thanks.
Sx

Tony - Indeed. there hangs a -rather shredded - tail.

Jason - Welcome to my humble blog. I'm still thinking about the right of Hitler left of Lenin bit though.

JoJo/Sybil - The mis-spellings are undoubtedly deliberate. I think it's a satire of poor spelling skills and nonexistent sub-editing on many local papers. Sybil - erm - why do you wnat to know where to buy a dick destroyer? Surely it's not for Dave Grohl???

SB - The Framley Examiner is truly wonderful n' est ce pas? I sent it round my office link and one colleague got the giggles looking at it in the silent carriage of her train.

I'm glad you like the Framley Observer, it's the local paper for Effing Sodbury.