Of wankers and freedom of expression.... 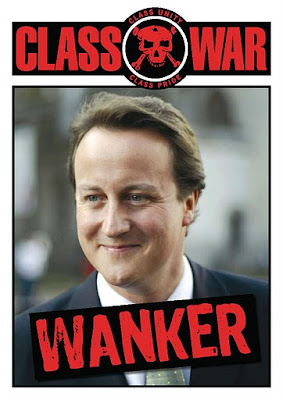 The above poster was produced by an organisation called Class War, a body usually described as anarchist and apparently dedicated to overthrowing the ruling order by being very rude about it indeed in - often very amusing - posters, stickers etc., including the above of 'Dave' Cameron, a Prime Minister.

A man in east London named David Hoffman (apparently a photographer of some distinction) put one of the above posters in his window. Who should arrive on his doorstep but plod? Four of them to be exact. They asked him for identification. This is on his own doorstep. He says that on going to close the door temporarily the police forced entry. The police deny this (oh yeah?) Let Mr Hoffman take up the story. 'They burst into my house, pushed me back and handcuffed me. They said I had committed an offence under section 5 of the Public Order Act, I was being detained, and I might be arrested'.

Huh? By what authority?

White Rabbit being at the cutting edge of law blogging, setting out the statutory provision relied on by the police is in order.

(b) displays any writing, sign or other visible representation which is threatening, abusive or insulting,

within the hearing or sight of a person likely to be caused harassment, alarm or distress thereby'.

A police inspector telephoned Mr Hoffman and expressed the opinion that 'any reasonable person' would find his poster 'alarming, harassing or distressful'.

I can only comment that the inspector has a rich fantasy life. Apparently a neighbour had complained that she found the poster offensive. But - he wrote in a patient tone of voice - that is not the same thing. At the risk of repetition, there is no human right not to be offended, nor is anyone protected by the criminaL law against being offended. Nor should they be.

Mr Hoffman duly took down the poster but, I am pleased to report, has put it back up with 'wanker' removed and 'onanist' replacing it. Much classier, I'm sure you'll all agree. As to whether 'Dave' is a practitioner of the gentle art of self-pleasuring, it is too early to tell. Okay, it isn't

Meanwhile on the other side of the political divide, there is much speculation who will stand for the now vacant leadership of the Labour Party. It may be that both Miliband brothers may stand. The rabbit as an undergraduate in the late middle ages used to occasionally attend their father's lectures despite not being on any of his courses. I wonder what he would have made of this. Actually, I have a pretty canny idea. Another possible candidate is Mr Ed, a horse.

Hello White Rabbit. It has been a while, I know. apolagies about that. Been away so am in desperate need of a blog catch up. Hope your well bud :-)

Well, given that I think my dog would be as good a US supreme court justice as most recent nominees,why not a horse as PM?

It may even attract the horsy conservative types.

Mr. Ed could say how hunting harms horses' legs and that should be the real reason hunting should be banned. That may get acceptance from the pro-hunting, pro-horse crowd.

The one benefit to having Lord Snooty as PM (in cahoots with the lib-dems) is they will take all the blame for any budget cuts regarding popular programes.

BTW, Alan Young was British. Like Tracy Ullman he went to the States and became an American.

Do you not have free speech in England?????? Let the cops try that in the USA and the ACLU would come down on them hard.

I Am Now spending The rest of Weekend working on a cunning Pun which will revolve around "Labour Party's new leader" "Mr Ed" and "Trots" .Wish Me Luck...........

Jessica - always a delight to see you :D

savvy - I think we've already gone a long way down the slippery slope...

Laci - I'm sure your dog would make an excellent Supreme Court Justice. After all Caligula made his horse a consul. The latest nominee is for some weird reason in trouble as there is an old pic of her playing softball with short hair thus proving she's a lesbian or something. All very odd...

I just re-read this. I don't mean she was playing softball with her hair. Oh never mind...

JoJo - well in theory we do. The theory is repeatedly tested to destruction of late.

Tony - I look forward to your oeuvre.

Who the heck is that nosey, uptight neighbor of his? Someone needs to slip her a little ex-lax...