Phew! Leeds finally promoted after beating Bristol Rovers 2-1 but they put the faithful through the wringer first. The story starts with a man called 'Mad' Max Gradel. It's 0-0 but Leeds are bossing play. 'Mad' gets annoyed and decks a Bristol Whatstheirname player. The referee sends him off. He won't go. He wants a pop at everyone. His team mates have to restrain him. Watch two of them wrestling with him on the clip. Then two security guys have to come on and remove him from the pitch. That's my kind of Leeds player. But that's the problem: indiscipline, self destruct button pressed, hubris. Been like that for decades...

Then Bristol Rovers score. Leeds losing 0-1. The rabbit is in despair. If we don't make it this season the wheels are bound to start coming off the wagon. It's Groundhog Day again. Then manager Grayson makes a substitution that changes the game. Howson comes on and scores in (I think) 4 minutes flat. Then Beckford scores. Nerves jangle. Don't concede a goal. Then we're up. Then resolution. We didn't and we are. Groundhog Day is finally concluded 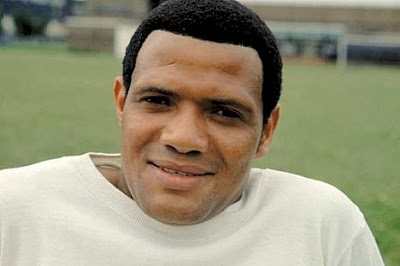 I've been meaning to blog about Albert for ages. Today is a good day to give effect to that intention. Albert Johanneson was a black South African. It seems weird to write it today, but he was the first black professional footballer of any particular note - at least in English terms, that is. He was a winger and amazingly skilful. He literally ran rings round people. There was a clip on YouTube, an old grainy black and white clip, of Albert doing a mazy run down the wing leaving opponents literally flat on their backs after failing to intercept him. I can't find it now, which is a pity. The Leeds crowd loved him. He was just 'Albert' to the entire town. Painfully shy, he asked the groundsman permission before going on the pitch to train. The habits of subservience learned in apartheid South Africa clearly ran deep. His wife went to the same butchers as my parents.'That's Albert's wife' it would be announced - redundantly - after she got out of earshot. Albert was joint top scorer as Leeds won the Second Division Championship in 1964. He took the first division by storm the season after.

There was to be no happy ending. His skills were met by the most dreadful racial abuse by opposing supporters and kicking by opposing players - notoriously Nobby Stiles who kicked him so badly in the 1964/5 FA Cup semi final that Albert couldn't make the replay. I quote from the late, great Billy Bremner 'I would like to say what an excellent player he was. He was frightening on the wing and used to turn defenders inside out. He was fast, clever with the footwork, very accurate with crosses, and had a terrific shot. I always thought that he did not get a fair deal from the media because he was black. They were forever on about being the first black player to do this, or the first black player to do that. They completely overlooked the fact that he was a terrific player and deserves recognition as a human being and professional footballer'.

Albert got more and more targeted. Bremner and Jack Charlton tried to protect him on the pitch but even they couldn't be the minders all the time. Things began to unravel for Albert boith physically and mentally. Appearances became more and more infrequent, his situation aggravated by persistent imnjuries and erratic form. He joined York City in 1970 after 200 games and 79 goals for Leeds. He retired in 1972 after doing nothing very special for York.

Albert drifted into alcoholism and penury. His wife and two children left him and went to America. People tried to help him but he didn't want to be helped. He was at one point a vagrant and a rough sleeper. He was found dead by police who forced entry in his council flat in Leeds in 1995 aged apparently 55 (I have seen two ages quoted for Albert). He had been dead for some days. He was buried in an unmarked grave. In the end a headstone was put on his grave. It includes a part of a Maya Angelou poem:

Out of the huts of history's shame
I rise
Up from a past that's rooted in pain
I rise
I'm a black ocean, leaping and wide
Welling and swelling I bear in the tide
Bringing the gifts that my ancestors gave I am the dream and the hope of the slave
I rise
I rise
I rise

Poor man. Such a sad story. 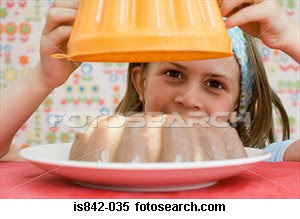 It will be noted that the rabbit has hitherto refrained from commenting on the election result. It would appear that we are to be governed by a sack of blancmange. Is it me or is he one weird looking character who seems to resemble his Steve Bell cartoon persona more with every passing day? Whether the sack of blancmange and his gruesome gang get to govern or not seems to depend on the Clegg person - someone the rabbit has never really taken to. The Clegg person is thus in danger of being removed from the traffic light axis of persons of goodwill. I can only hope that the sack of blancmange fails massively and the electoral system - which is as bent as a nine bob note - is reformed so that his ilk can never form a majority government again - not that he could manage it in the first place. I have spoken. While on the subject of traffic lights, here is a pic nicked from Jailhouselawyer, which is fun, of a birds' nest on some traffic lights in Leicestershire. 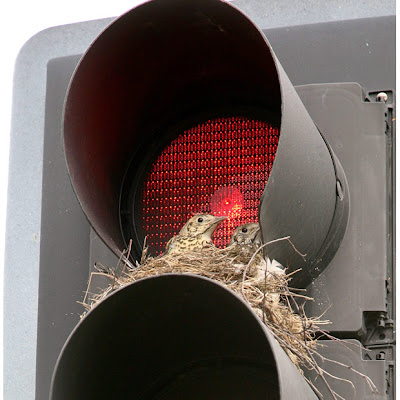 what a tragic story, sugar! it always astounds me (and after all these years!) how much talent we've wasted because of the color of a man's skin... and yet, i still live in hope. xoxoxox

One of my oldest friends is a Man U supporter. BIG TIME. I have to wonder what kind of horrific crimes are going to take place in Cape Town this summer for the World Cup. There are roving bands of machete wielding blacks singing, 'kill the boers' and threatening to rape and murder as many white tourists as possible. It's scary.

Savvy - It is a painful story. I've been meaning to tell it for a long time. Yesterday seemed a good time.

I get back to you on that one.

We don't mention Man U in Leeds. Well we do. But we don't call them Man U. We call them something quite unprintable.

My word, what a sad story about Albert!
Awesome post, Rabbit.

Evolved souls have greater challenges. That is for certain... but I still wish that all bigoted bastards would somehow get a glimpse of clarity and really FEEL the abuse they are inflicting, as though it were being inflicted on THEM. Sigh.

Well, that was a lovely tribute WR. Peace,
pf