Time to turn the mind to matters sporting. England play Australia in the World 20/20 final and the football World Cup looms . I'm struggling to get very worked up about either. Albeit that it is hugely entertaining, I can't see 20/20 as 'proper cricket' and the World Cup will no doubt be prefaced by the usual England will win it because we ought to because we invented the game and we haven't won since 1966 which isn't fair etc etc hype followed by the letdown.

I also assume that the World Cup will be 'celebrated' by some dreadful song. They always are. Above is the only song of this type that was ever any good. Vindaloo by Fat Les - an entity consisting of Alex James (music) Keith Allen (words - yes he of father of Lily of that ilk fame) and Damien Hirst ( don't ask me how he came into it). Vindaloo was created for the 1998 World Cup and was a wholly unofficial anthem. The words are wonderful - okay the words are mostly na na na na but include such gems as...

Where on earth are you from?
We're from England
Where you come from
Do you put the kettle on?

Can I introduce you please
To a lump of Cheddar Cheese
Knit one, Pearl one
Drop one, Curl one

Even if you know nothing about - or evn positively hate - football, have a look at the video. It's deliciously surreal - featuring a Max Wall impersonator and if I am not mistaken a young Matt Lucas.

I would blog about the election but haven't the heart. Maybe soonish. Here's a Spanish CNT/FAI poster to cheer people of goodwill up. 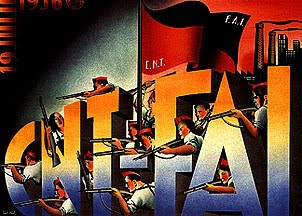 A truly great video, much of its time...

From what I understand, the song for the World Cup is going to be "Kill the Boers." If no horrific crime is committed against white tourists, I'll be shocked.

England crushed the Aussies, a precursor to the World Cup I hope!