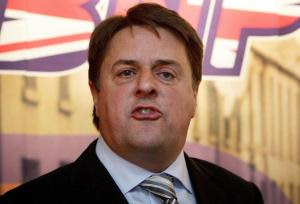 Is the BBC run by complete pillocks? Okay, the answer is plainly 'yes' but further exposition is required. It is presently again contemplating its much vaunted 'impartiality'. The last time the BBC's 'impartiality' got a walk around the park was back in January when, in common with Sky (prop: its would-be nemesis James Murdoch), it refused to carry the Disasters Emergency Committee appeal for Gaza, complete with a flurry of hand wringing as regards its 'impartiality' - which presumably extends to imapartiality as between the victimisers and the victimised. But I digress.

The BBC has been pondering whether to invite the BNP - or more particularly its gruesome gargoyle (and very poor advert for the excellence of 'indigenous Caucasians' in BNPspeak - see above), of a leader on to Question Time. It's our old friend 'impartiality' again and the BNP is now represented at European Parliament, Greater London Assembly and County Council level, the argument goes. The interests of impartiality require the BNP on Question Time.

Ah but - I can hear the cry - what about democracy? However repulsive the BNP may be, it is a registered, lawful political party with an elected presence. But the BNP is in no sense a 'normal' party. It chooses which of its assorted elected members' constituents it sees fit to represent. The choice is of course made on the basis of race. And that is quite apart from the track record for acts of violence and holocaust denial on the part of many of its prominent members. No doubt many of its rank and file members are 'merely' bigots, buffoons and general losers but let there be no doubt as to the nature of its leadership. Nazi scum with a superficial public relations gloss are still nazi scum. So what to do? No doubt whatever the outcome, the BNP will garner huge amounts of publicity. The Conservatives and the Liberal Democrats have already said that they will debate with the BNP. Labour has done its usual jellyfish impersonation. Having previously had a policy not to share a platform with the BNP, they have caved in instantly, with the caveat that no-one should be forced to debate with the BNP. Subject to that, they intend tio put a cabinet minister out.

What to do? I would grudgingly concede that the BNP are entitled to free speech. Up until their freedom of speech impinges on the freedoms of other people. I would not wish for them to be able to claim some spurious martyrdom, No doubt the BBC will put Griffin on Question Time and no doubt there will be riots outside, and possibly inside the TV studio. No doubt the mainstream political parties will put up panelists to share the platform with him.

What should be done, then? Rather like the bishop who told a would-be convert that he was obliged to believe in hell but not that anyone was in it, if the BNP are entitled to free speech then no-one is obliged to listen to them. The remaining three or so members of the Labour Party could start by seeking to reverse the party's spineless capitulation on not sharing a platform with the BNP. It would be nice - if improbable - if other mainstream parties took the same position and refused to share a platform. No doubt some bottom feeders could also be found to turn up but if it was apparent that no-one but the bottom feeders would play ball with the new BBC exercise in 'impartiality' then the exercise would be, and be seen to be, a busted flush.

Unfortunately, this will not happen.

On a more cheerful note, have some more Fleetwood Mac. This is from their 2009 tour - Go Your Own Way - note the video and audio quality.

When next we meet, remind me to tell you about a pal of mine who arranges and provides security for the BNP at their 'social' functions.

If you pour a good single malt down my throat I might just have to recall a tale which was hushed up a few months ago concerning a former member of the BNP and a mixed race lady of the night.

I will refrain from putting it all to print, but I will discuss it in private at some stage.

Mr Bastard - The single malt will be of the finest quality ;)

i'll go halves on the cost of a bottle.

absolutely - anyone remember the old 'no platform for racists' nus policy. excellent. what an interesting programme it would be if the bbc had griffin and nobody else on question time. if they had any balls they would just refuse to share the platform as you suggest. ignore the fuckers (or perhaps stab them on the way home). and bollocks to democracy. when you know it's wrong, it's wrong and you can dress it up any way you like and put the bastards on tv. still wrong.
no fucking about.

Seeing as 'No platform' and other such unproductive methods have not worked at dealing with the problem of the BNP after all this time, why do apparently intelligent people persist in extolling its virtues?

The only way to deal with this kind of racist bile is to openly and publically debate with them and expose them for the idiots they are.

Actully, the labour party have much in common with the roots of the BNP. Cameras watching the population? Spying on your phone calls and internet connection?

Oh yes. this is just "for our safety". Well thats all right then.

May I remind everone here what it was like in Russia and East Germany? Not much different to what its like here now. So tell me, WHY are the BNP labelled by the media and government as fascists? ( and I do not support those fuckers)