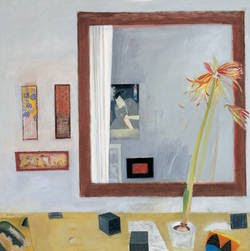 I always thought Blackadder was a made up name to give a suitably villainous flavour to Rowan Atkinson's eponymous character. But no! It is a real name and there is a Dame Elizabeth Blackadder, an artist and member of the Royal Academy. Above is her Still life with Mirror and Japanese Print. It's her birthday today so happy birthday to you in the extravagantly improbable event that your Dameness reads this!
Talking of birthdays, Bruce Springsteen was 60 yesterday. Good job he shows no sign of acting his age.
The Lib Dem conference was hardly a storming success. This is, in my opinion. because they flip flop (to use the Americanism) in confusing patterns as exemplified by their faintly silly leader blethering on about 'savage cuts' (isn't this the party of Beveridge and Keynes?) and then something called 'progressive austerity'. Huh?
Reverting to Blackadder, the last few minutes of the final episode ever achieve what comedy rarely ever manages: to be genuinely moving. Here they are...
Posted by white rabbit at 15:54

What a great painting though; I thought it was a photo.

ditto what jojo said about rowan atkinson (and the painting). although mr. atkinson was perfectly cast in love actually :~D xoxoxo

y'know this clip never fails to make me cry