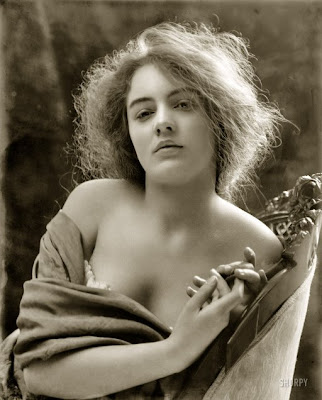 Regular readers of WR will know of my fondness for the old photographs blog Shorpy (link to left). Much excitement has been caused at Shorpy following the posting of this photograph of a striking looking young woman. The photograph dates from about 1900. One commenter announced that he was going straight back to work on his time travel machine as another put a damper on the excitement by pointing out that she would be about 130 now.
The photograph has a title, namely Thisbe. What did this mean? I confess I didn't know and some researches were in order. It turns out that the title refers to Thisbe and Pyramus, a Roman myth. Let Ovid take up the story: 'Pyramus was the most beautiful youth, and Thisbe the loveliest maiden, of all the East lived in Babylon'. We are in Romeo and Juliet territory here. They livewd next door to each other but their respective parents were at odds and would not allow them to marry. Ovid again: 'they conversed by signs and glances, and the fire burned more intensely for being covered up. In the wall that parted the two houses there was a crack, caused by some fault in the structure. No one had remarked it before, but the lovers discovered it. What will not love discover! It afforded a passage to the voice; and tender messages used to pass backward and forward through the gap'. They arranged to meet at the tomb of Ninus (a mythical Persian King) and the first to arrive was to await the other at the foot of a white mulberry tree.
Thisbe arrived first, but upon seeing a lioness with a mouth bloody from a recent kill, she ran away leaving her veil behind. The lioness drank from a nearby fountain, then by chance mutilated the veil. When Pyramus arrived, he was horrified at the sight of Thisbe's veil and, assuming that a fierce beast had killed her, killed himself, by thrusting a sword into his groin, and in turn splashing blood on the white mulberry leaves and turning them dark. Thisbe returned, eager to tell Pyramus what had happened to her, but she found Pyramus' dead body under the shade of the mulberry tree and after a brief period of mourning, stabbed herself with the same sword. In the end, the gods listened to Thisbe's lament, and forever change the colour of the mulberry fruits into the stained colour to honour the forbidden love.
So, an ancient myth and a no doubt long dead young woman. Eheu Fugaces.
Posted by white rabbit at 13:31

That shorpy site is pretty damned wonderful. So is that long dead young woman.

although the latin is far more poetic, alas! the fleeting years glide on gotta love a place where latin is used! the sisters of st. joseph of carondelet would be so proud to know i still use it! xoxox

Thanks for the reminder of that beautiful story. Ovid was one of my favorites when studying Latin.

Wow, Shakespeare was a plagerist.

Beautiful picture. I remember of once hearing of Ovid's law. If you have the choice of two woman, always pick the plainer one over the more beautiful. She will be eternally grateful and you will have far greater returns.

This is a very striking picture of a lovely young woman. To me, it serves as a stark reminder of the fleeting nature of human life and human beauty. We must enjoy life to the fullest while we can!

And thanks for the information about Pyramus and Thisbe. I knew of them only because they are referenced in A Midsummer Night's Dream.