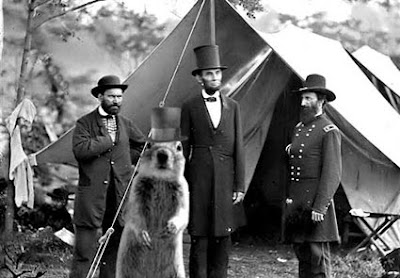 The little creature known as Crasher Squirrel (see 17th August - the original was taken at a place called Lake Minnewanka - no, I am not making this up!) is now all over everywhere through the miracle of photoshopping. Here he is with Lincoln (nice hat squirrel!) The little fellow must be knocking on a bit - here he is making friends with Putin. There is inevitably one of him with Hitler but as nazis are banned for now, it's not going up. 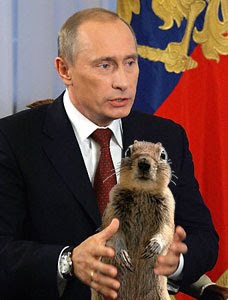 I'd trust the squirrel long before I'd even think of doing business with Putin.

As regards Putin, to quote a phrase the late Harold Wilson was fond of (really! I have this on good authority):

'Don't trust him as far as you could throw him by his limp cock'.

Why O WHY aren't there any Crasher Bunnies?!

I love that squirrel. So cute.