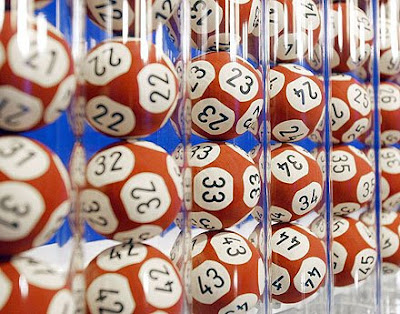 I play the lottery on and off. I know it's a waste of money but I do. I've won the odd tenner but that's it. The lottery is generally a bad thing - a device for getting poor people to voluntarily pay extra tax. I rather liked the description of it as 'the desperation tax'. But that isn't the point I wanted to make. Last night I pottered into the living room just as the lottery results came up. The result was another example of the phoenomenon I call 'bunching'. There were three consecutive numbers, 33, 34 and 35 among the six balls drawn. This seems to happen fairly regularly - not necessarily consecutive numbers but sequences of two or three closely linked numbers. Conclusion: that the devices for juggling the balls before the draw are inefficient or the juggling is too short. Discuss...
Historical anecdote: after the Bill for the abolition of slavery was passed with an overwhelming majority William Wilberforce asked sidekick Henry Thornton “Well, Henry! What shall we abolish now?” Thornton replied, “The Lottery, I think.”
They did as well.
Random Thought: After Bill Clinton's performance at the DNC yesterday the question came to mind: why does he always remind me of the saying 'Sincerity! That's the thing! If you can fake that, you've got it made'.
Posted by white rabbit at 09:15

The problem with Bill Clinton, in my opinion, is that he can't fake that sincerity well at all. I always found his remarks transparently phoney. I'm gonna watch the speech tonight. I hope it helped the cause.

I tend to play the lottery when it reaches an ungodly amount.

I have always referred to the Lottery here as the poor mans financial planning.

The thing that I don't understand about Democrats is how they can even stomach allowing Bill Clinton to speak. I mean, the man was an adulterer in the White House with a 'girl' the same age as his daughter. I always assume that they have to trot him out because he is a surviving president (where was Jimmy Carter?), but I assume they really don't want to.

Next will be McCain and the RNC, and lets see if they trot out Bush Sr. and Nancy Reagan. They always do.

The lottery brings hope to a lot of people who have shitty little lives. Me personally, I prefer to make sure the odds are in my favour. The only way I know how to do that is to earn my cash.. the old fashioned way.

So true about the lottery!

I watched the lottery last saturday with my next door neighbour and she got two balls.

The wife hasn't found out yet...

Our national lottery is a joke. It got shut down for corruption for awhile. It's back now, but I'm not about to trust it wish any of my dosh!

Thanks for stopping by my blog, btw. Tomatoes in graveyards... great way of recycling organic material, I guess ;-)

Yeah but Wild Bill and the Clinton Years sure were a lot of fun.

I once won 16 quid on a scratch card.
It made quite a contribution to my ENORMOUS student debt, naturally.
A bit like throwing a pea at a Rhino.

I keep buying and forgetting to check em. How's that for waste?