Still crazy after all these years and updates 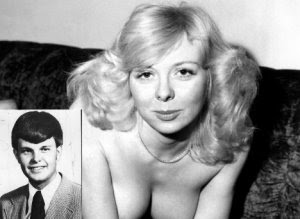 Quiet in blogworld at the moment, I notice. It's a seasonal thing. Real life interrupted blogging for the rabbit last week and will do so next, but this story is irresistible. Mention Joyce McKinney to a British male of a certain age and a gigglefit will ensue. For the unintiated, here is the story. We go back to 1977.

Joyce McKinney was a former cheerleader and beauty queen from - why am I not surprised - North Carolina. She had also been, despite her claimed virginity - a topic the great British public heard much of - a soft porn actress and images of her as such can be found on the web (wholly unsuitable for a family blog, of course!). She conceived a passion for a 19 year old Mormon missionary called Kirk Anderson and when he set off to England to do missionary things, our heroine cashed in her life savings and set off in hot pursuit. So far so passing odd, then it gets seriously weird.

Arrived in Britain, McKinney recruited a stooge called Keith May and kidnapped Anderson at gunpoint (okay it was an imitation firearm but bear with me), drugged him with chloroform and drove him to a rented cottage in Devon. What happened then was that Anderson - another virgin apparently - was chained, spreadeagled, to a bed, with several pairs of mink-lined handcuffs (nice touch, the mink lining), and over the next few days he was repeatedly required to have sex with McKinney. She later helpfully explained that she had been anxious to bear his child. By way of further explanation, she added that the handcuffing had been necessary as Anderson had a dominant mother and thus such aids were necessary for him to attain - erm - satisfaction.

Anderson managed to escape and McKinney and May were arrested. Court proceedings ensued. the great British public found the case the most hilarious news story in years - it just pushed so many British buttons. The tabloid press were drooling. Sympathy for Anderson: zero. There was only one court appearance, an old-style committal with evidence. McKinney unburdened herself in those proceedings of the following immortal line: "I loved him so much that I would ski naked down Mount Everest in the nude with a carnation up my nose if he asked me to." Quite so. At least she said nose. Her counsel summed up the national mood with the equally immortal line "methinks the Mormon do protest too much".

Unfortunately, the fun was spoiled when the dynamic duo were granted bail and took the opportunity to abscond to Canada disguised as mime artists. Don't ask, I don't know why mime artists either. End of story? Not quite.

Earlier this week someone called Bernann McKinney was in the news. She denied being Joyce McKinney but she obviously is. Her pet pit bull - erm - Booger has been successfully cloned by a team of South Korean scientists. I have no idea why this needed to be done but our heroine seems very happy with her collection of little Booger clones. Thus located, in theory, she could be extradited to stand trial for kidnapping. I don't suppose she will, though. A Scotland Yard spokeswoman commented when contacted by the press "I'm sorry. I haven't a clue what you're talking about." That was then. This is now...

A couple of updates on recent postings on this blog. The Israeli Lieutenant Colonel in charge of the rubber bullet shooting of his prisoner in Nil'in (postings 21/25 July) has been 'reassigned' and charged with 'unworthy conduct', a minor offence not carrying a custodial penalty. The sergeant who pulled the trigger has been demoted to private and faces the same charge. Apparently, penalties would be much more severe if they had been caught smoking a joint. Other events in Nil'in: a 10 year old and an 18 year old have been shot dead by the Israeli army (headshots as usual) and one person at least is in custody - the father of the girl who took the film footage that busted the shooting incident. He is under house arrest charged with something not very serious. Injustice prevails as usual.

One good news story: Majid Ahmed, the straight A student who was refused a place to study medicine at Imperial College because of an isolated and spent conviction for burglary when he was 15 (posting 3 July) has secured a place at Manchester University instead and can hopefully realise his ambition to become a doctor..
Posted by white rabbit at 09:14

OMG!!!! I saw the cloned-doggie story and never made the connection!!!! (Me and Mr Daisy started the predictable PET SEMATARY jokes. Is she SURE it is her beloved puppy or, you know, something else?)

And I hope you intend your references to the Carolinas in a FLATTERING WAY???? And as for--

"I loved him so much that I would ski naked down Mount Everest in the nude with a carnation up my nose if he asked me to."

--this is a standard southern-beauty-queen thing to say. You Brits would LOVE it here!!!! :P

(Its so funny; she talks about the pup in the same gushy ways as she did Anderson, lmao! He's been REPLACED in her affections, no question! lol)

[McKinney] and a male accomplice were accused of abducting the 21-year-old missionary as he went door to door, taking him to a rented 17th-century "honeymoon cottage" in Devon and chaining him spread-eagled to a bed with several pairs of mink-lined handcuffs.
There, investigators say, he was repeatedly forced to have sex with McKinney before he was able to escape and notify police.
In a 1977 court hearing mobbed by the British press, Joyce McKinney said she'd fallen head-over-heels in love with the Mormon man and acknowledged tracking him to England. "I loved him so much," she told a judge, "that I would ski naked down Mount Everest in the nude with a carnation up my nose if he asked me to."
But she denied a sexual assault, saying the young man was a willing partner.
"I have been played up as a very wicked and perverted woman," she told the court. "It's not true."
McKinney and her accomplice spent three months in a London jail before being released on bail.
Press reports at the time that said the pair then jumped bail, posing as deaf-mute actors in Ireland to board an Air Canada flight to Toronto and eventually a bus to Cleveland, where investigators lost their trail.
Joyce McKinney surfaced again in Utah in May 1984 and was arrested for allegedly stalking the workplace of the same Mormon man she was accused of imprisoning in England. News reports say that police found a length of rope and handcuffs in the trunk of McKinney's car, along with notebooks detailing the man's daily activities.
Set to stand trial for lying to police and harassment in 1986, McKinney again disappeared just before proceedings and the case was dismissed.
It now appears Joyce McKinney may have escaped justice in the long-ago British case also. London police told The AP they've consigned the case to the history books because of its age and won't seek McKinney's extradition.
The Associated Press obtained a copy of the 1984 Salt Lake County booking documents, which lists McKinney's full name, address, Social Security number and birth date. The AP compared the data to court and address records on file in North Carolina.
In both states, documents list McKinney's full name as Joyce Bernann McKinney and cite an Aug. 6, 1950, birth date, along with a hometown of Newland, N.C. A comparison of Social Security numbers on the documents show an exact match of the first five digits, the only numbers typically available in public records.
At the Avery County courthouse in McKinney's hometown of Newland in the western North Carolina mountains, a clerk said she instantly recognized the woman snuggling puppies as the Joyce Bernann McKinney who has a been a frequent defendant in court cases there.
"She is a person of note in our little community," said clerk Julia Henson.
Avery County Sheriff Kevin Frey said there are several charges on file against Joyce McKinney, including an active warrant seeking her arrest on a 2003 charge of communicating a threat against another woman.
Other charges include passing bad checks, an assault on a public officials and an 2004 animal cruelty charge alleging she failed to take proper care of a horse. That charge was dismissed.
James Stamey, the husband of the woman McKinney was charged with threatening, said McKinney left Newland about two years ago and no one had really seen or heard from her.
Until she showed up in the news about the cloned puppies.
"That's our Joy," Stamey said from his home in Newland.
Years ago, Stamey said, McKinney was a beautiful girl worthy of the Miss Wyoming USA crown.
"She's ugly as sin now," he said. "But, sure enough, that's her."

I can see why yall loved this story, it's RICH! :P

As they say, the truth is stranger than fiction. But I'm really glad she said the flower would be up her nose.....

Ah! I remember that lady! Brings back some funny memories!

Oh and as always, just click this button to be connected LIVE with me!