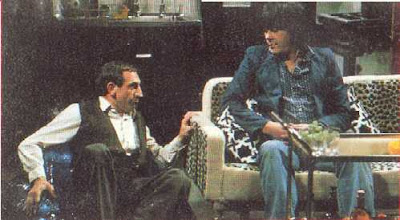 Ahhh the memories are flooding back to me after reading your descriptions of various hotels in the Midlands. Many years ago before I started my own company, I used to travel the length and breadth of the country plying my trade as a builders labourer. My frequent stays overnight in flea pits and down-market hotels remain etched in my memory still.

I don't envy you my friend.

I am REALLY glad I never saw that cartoon whilst on acid. lol Oddly enough, the action did fit the lyrics. Weren't the live versions sweet? Bobby would be yelling "AND THE RICH MAN IN HIS SUMMER HOME!!!" and the crowd's going insane...ah, good times.

As to disgusting hotels, I've seen my share of them too. I did a blog post in Sept. 07 of the hotel in which my friend & stayed, in Portland OR. We called it The Hotel Sordid. I trashed it on Trip Advisor and posted the photos of our gross room. I've recently started the practice of examining the mattress seams & bed for signs of bedbugs before I even unpack or get settled. Then I get myself all paranoid that my legs start to itch anyway. *shudders*

Good GRIEF, Rabbit, your hotel stays sound as if you are taking your life in your hands!!
I've stayed in some dumps in my time, commonly around Victoria Train Station when coming to the smoke to dine in; when the booking web page offers a room at £25 plus brekfast I rapidly came to realise that such an offer was way to good to be true, and spent many an anxious and sleepless night armed with a flyswot ( for potential creepy crawlies) and a torch!
Brekfast, positively SWIMMING in grease, doesnt even BEAR thinking about!!

Mr Bastard - I met a friendly gang of Glaswegian railway workers in the better than okay place I stayed in on the Sunday night in Stoke. They invited me or a few beers on the Monday night but by then I had moved on to the Fleapit, plus I suspect an evening in their company might not have been compatible with a clear head in court the next morning ;)

JoJo - gnomes and acid - bad combination nodnod. I looked for live versions on YouTube - complete with Bobbykicks - but sound and visual quality pretty poor so I settled for the gnomes.

Minx - I wasn't in any danger, just running the gamut of emotions from amused to appalled. I know what you mean about the breakfasts, though. If I see another full bloody English I'll go vegan or something...

Rabbit, I've asked for your help over on my blog because my pro-gun commenters keep citing the UK in their arguments against my claiming there are too many guns in the US. They seem to know much more about Great Britain than I do. I wondered if you agree with their description of what's happening in your country

Mike - responded - and about crap hotels???

'I've been put here by the council'

Okay, what is "the council"? Like is this the British equivalent of Social Security?

Daisy - the Council is - erm - the local authority as in Town/City Council. They have reponsibility for homeless persons. What must have happened here is that the elderly man presented himself to them as homeless, they accepted a housing responsibility for him and put him in temporary accommodation (the Fleapit Hotel) while finding him permanent housing (hopefully the bungalow he spoke of0. Temporary accommodation for homeless persons is usually in a soul detroying (but cheap) dump and the homeless person can stay there for a long time before permanent rehousing. Being homeless must be distressing enough without living in miserable conditions as well.

It was rude of me to ask your assistance without even commenting on your post.

I've stayed in hotels of every description. Ont thing that works for me is this: The older I get, the more stars I need on my hotel.

Thanks for the help on my blog. Those are some tough Americans aren't they?

Brings back floods of memories from my days travelling and sleeping at B+Bs when I was an office partitioning installer. My favourite memories was the place in Cheadle where for breakfast one was proffered full english with the bacon given the rather nice touch of all the edges being sort of "snipped" or cut. The landlord's dog used to gaze up at me eating brekkie as if to say "I've just chewed that for you to save your teeth the effort"

Another place we stayed at had an en-suite with an electric shower which duly fell off the mains pipe when I used it and caused a veritable Niagara right up to the cieling and down again.

"My favourite memories was"!

Please excuse the bad grammar. It should of course read:

"Me favourite memories was"

Ronald - Your electric shower story reminded me of staying ina B&B in Norwich a few years ago. The toilet in the en-suite was one of those mechanically powered thingies (cos room was in loft). The mechanical thingy malfunctioned. Result: a tide of - erm - brown liquid across the en-suite's carpet. Not nice...