The story that got buried... 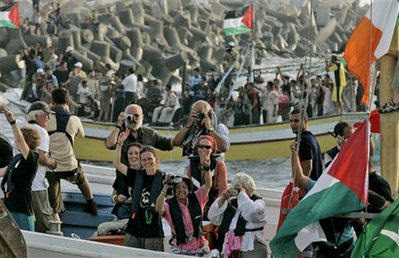 You would have to be a pretty serious newshound to follow this one. There has been an israeli naval blockade of Gaza - a glorified holding pen - since Hamas inconveniently won the Palestinian elections. The resultant hardship includes - but it is not limited to severe shortages of medical materials.

The California based Free Gaza movement decided to try and break the blockade with two boats - checked by international monitors to make sure there were no armaments or dangerous materials on board - and a symbolic cargo of hearing aids and balloons (for the children). There were 47 crew members in the two boats, including an 81 year old nun and our very own Lauren Booth - but only one Israeli (I'll come back to that one). The boats set out from Cyprus - about a 30 hour journey.

Cue much Israeli huffing and puffing. 'A provocation' they whined. They were in a dilemma as to what to do. The military wanted to stop the boats by force and seize, interrogate and generally give a rotten time to the crew. This of course would attract huge international publicity and be public relations poison for the Israelis. So in the end they let the boats through and they arrived in Gaza to a rapturous welcome. Smart move by the Israelis, though. The story dropped off the radar. They made clear that this was a one off. The naval blockade remained and it ought not to be assumed that future boats would be let through.

A modest proposal: keep doing it and doing it with two refinements. Firstly, take actual as opposed to symbolic cargoes of medical etc supplies. Secondly, the preponderance of western activists in the crew makes it easy for the Israelis to dismiss the project as the usual western pro-Palestinians at it again. Maybe next time crew the boats with Israelis and Palestinians.

Do you believe that the Israelis would have stopped the initial boat had it carried actual medical supplies? Was that their stance?

Earl - I really don't know. I'd hazard that the answer is 'probably'. You'd have to ask the Free Gaza people why they chose a symbolic cargo as there was presumably nothing to stop them taking actual medical supplies.

A nun on a boat? Talk about a doomed mission right from the offset. Nuns rank higher than an Albatross when it comes to being jinxed at sea.

Mr Bastard - Are we thinking Gerard Manley Hopkins and 'The Wreck of the Deutschland'? Better than two nuns in a bath anyway... ;)

Great story about the Gaza run. You're right I'd have had to dig deeply to find that one. That's why I come here.