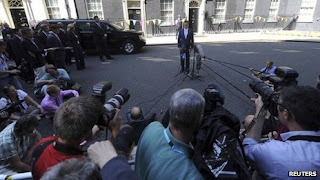 The above is a person named Romney. He wishes to be President of the United States and to that end is doing an overseas tour so he can look 'statesmanlike' and hobnob with overseas leaders. It's a routine gig. Romney hit London yesterday on his way to frighten Angela Merkel in Germany and get his orders from - sorry have discussions with - the odious Netanyahu. Below and from the glorious Steve Bell is Chancellor Merkel in receipt of correction from the present incumbent so it will be clear to all why the prospect of the Romney person causes her such alarm. 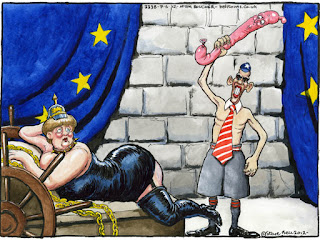 But the rabbit digresses ... The Romney person has proceeded to make a balls up of heroic proportions of his London visit. Not content with addressing leader of the opposition and panda lookalike Ed Miliband as 'Mr Leader' (note for overseas readers: absolutely no-one would call the leader of the opposition 'Mr Leader' - it just sounds ridiculous) the Romney person also announced that he had a discussion with the head of the British security services (memo to the Romney person: you don't do that) but above all he has got the entire UK population behind the London Olympics. 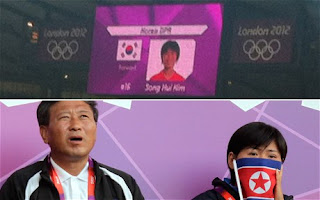 Now it should be explained that the run up to the London Olympics has puzzled overseas persons in that it has been greeted by a very British barrage of eeyeball rolling and muttering. The rabbit has joined in this. We're just like that. Get over it. The substance of the complaints may be summed up as follows:

London's transport system - a delicate flower at the best of times - is bound to either grind to a halt or at least be massively disrupted. This happens regularly without the extra load generated by the Olympics.

Being required to festoon London with 'Zil Lanes' so that the 'Olympic Family' (what a sick inducing expression) or at least the top honchos can whizz around untroubled by traffic congestion strikes everybody as elitist, annoying and bound to add to aforesaid congestion. Ordinary mortals get fined £130 for driving in the Zil Lanes by the way.

The security measures appear to be paranoid and practice for living in a police state. The bloated incompetents of G4S (the hierarchy of which have got very rich at employing people who can't find anything else to do and paying them very little for assorted incompetently executed and in some cases unconscionable 'security' activities) have managed to make such a hash of a huge contract that troops have been drafted in to assist (I don't mind this - the troops will no doubt make a better job of it but why the G4S clowns had their pockets lined to screw up in the first place ios a cause for mystification.

Rocket launchers being planted on people's rooftops without their consent and against their wishes (don't ask).

The opening ceremony - which is this evening as the rabbit writes - sounds promisingly bizarre. It is to be directed by Danny Boyle and features farm animals - as in real ones. Don't ask me why - but Steve Bell has struck again by satirising the opening ceremony as featuring a cow reciting John Keats' Ode To A Nightingale. No - yet again I don't know why but sounds promisingly surreal.

Also promising was posting the South Korean flag next to images of the North Korean players (who were actually playing) in the women's football game the other day. The North Koreans had a predictable hissy fit and walked off for an hour. This sort of cockup is to be encouraged.

But back to the Romney person ...

The Romney person was interviewed by NBC yesterday and announced, speaking of the london Olympics, that stories about difficulties with security guards and threats of border staff strikes were 'obviously... not something which is encouraging'.

The one thing that will totally piss any British person off is being talked down to by a US politrician - and especially an obvious knob like Romney whose claim to have made a great success of the Salt Lake Winter Olympics got short shrift from 'Dave' Cameron, a prime minister. 'We are holding an Olympic Games in one of the busiest, most active, bustling cities anywhere in the world' opined Dave. 'Of course it’s easier if you hold an Olympic Games in the middle of nowhere'.

Ooh cutting! Of course Romney has back pedalled futriously but the damage has been done.

And the rabbit's present attitude? Well I'm softening. There is force in all the criticisms but I don't want it to be a shambles. I prefer the Winter Olympics with lunatics jumping off ramps at speed into the air and the sheer violence of the ice hockey but I'll watch some of it. It will be overblown but these events are always are. Chance ofa s ense of proportions may be filed away under 'slight'. Oh and Romney has a horse competing in some equestrian event. 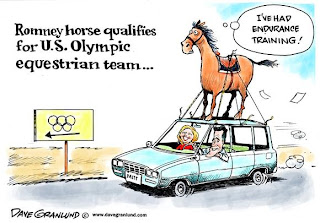 Romney used to be the Gov. of the very liberal MA, which has always surprised me. Sadly, I am not voting this year. I'm fed up. My vote means nothing and I'm not happy with either candidate. Romney's an animal abuser, Obama bailed out big biz and the banks instead of helping the over taxed taxpayers.

How a Republican can criticise anybody for organisational failures after Bush's inability to deal with Hurricane Katrina when it hit New Orleans is beyond me.
Far poorer Chile's handling of the 4th most severe earthquake ever recorded was much more competent.

I'd apologize for Romney, but I'm frankly glad he screwed up so royally.
Sorry he's such a douche, though.

I will apologize for the entire US. As a nation I find us sophomoric and petulant in our approach to well, just about everything. Lets not forget narcissistic.

He does not represent me, but he does a whole lot of other people. While he is making a mockery of all that side of the fence believes in (or pretends to), he is doing us all the service of busting the myth of you get what you pay for. I guess we can all thank him for that.

All - I do confess to having taken an intense dislike to Romney in world speed record time. It was indeed good to see him make such an arse of him,self in London, then he went off to Israel to insult the Palestinians and display the breadth of his ignorance. He's now in Poland (not Germany - the rabbit fact checker was asleep or something) where it is difficult to see how he could balls up. I expect he'll find a way though ...

I rather like a (inevitably Steve Bell) cartoon today with the top of his head as a toilet lid. The caption ...

The base Michael Kors Outlet Online throbs with uniforms of regular infantry Coach Handbags Clearance battalions; yet, it is the human heart of a ghost town. Outside, Mir Ali has changed. North Waziristan has been taken, but at a cost: The entire city of Mir Ali has been depopulated through what Major General Zafarullah Khan Khattak, the General Officer Commanding of the 7th Infantry Division and the man in charge of Operation Zarb e Azb ( of the Prophet Sword calls organised exodus.

"[Sept. 11] was a turning point for the nation that changed governmental policies and Americans' conception of their role in the world. The same Cheap Jordan Shoes For Men was true of World War I. His perceptive and self deprecating tales of studio Ray Ban Sunglasses Sale life and his years as a producer have made riveting entertainment. Audiences at May's Cannes Film Festival and in Los Angeles screening rooms have been soaking up the mogul's mannerisms that New Yeezy Shoes filmmakers Brett Morgen and Nanette Burstein captured in their documentary. The audio book version Coach Outlet Sale of his memoir, featuring his distinctive, dramatic narration, has a cult following, Cheap Air Force Ones selling a chart busting 50,000 copies since it was released in 1994.