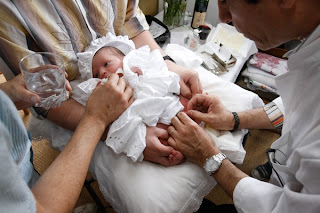 This isn't new news - as it were - it broke last week but bears further consideration. A German court - in Cologne to be exact - considered the case of the circumcision of a 4 year old boy in accordance with the wishes of his Muslim parents. It constituted bodily harm, the court concluded (the matter became contentious as the boy began to bleed profusely two days after and had to be hospitalised). The boy's right to physical integrity and self-determination trumped the parents' religious freedom.

This as may be imagined became just a touch contentious. Jewish and Muslim commentators were predictably hostile. The Turkish Europe Minister offered grumpily to send the Germans 'scientific circumcisers' to 'show the Germans how to circumcise'. Very thoughtful, I'm sure - although there does not seem to be any suggestion that the procedure was carried out defectively. The fact that it was a German court ruling in a Jewish practice caused raised eyebrows.

And I think? well on one level the ruling seems unanswerable. To use a sharp instrument to remove  a section of someone's flesh is prima facie an assault. There are possible defences - namely necessity and consent but neither applies to the routine circumcision of infants and boys too young to give an informed consent. So does religious freedom trump the boy's right? Well maybe but if that is the case then the invidious result follows that parents motivated by religious factors have a defence but non-religious parents having their boy circumcised out of a belief that it is the appropriatev thing to do do not.

Hygenic arguments? Try soap and water. Plus all surgery carries a risk - albeit an extreme example, a link story shows 11 boys contracting herpes through a bizarre form of circumcision (TMI alert for details).

And therefore? I wouldn't make circumcision a criminal offence or actionable in damages generally. I'm not quite sure why I wouldn't but that's the view I reach. Incompetent execution of the circumcision or inherently unsafe 'techniques' (see link) must be at least actionable in damages in any event. Hopefully the practice will fade away with the passing of time without any martyrs to the cause. 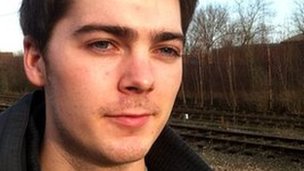 I've blogged before on the unequal nature of UK/US extradition arrangements - the above young man is Richard O'Dwyer who gruesome secretary heresa May has approved his extradition to the US for -er - copyright infringement. He faces a sentence of up to 5 years imprisonment for offences - which if offences they be - were committed in the UK and would attract a maximum 6 months imprisonment here. Wikipedia founder Jimmy Wales has organised a petition. Feel free to sign.

Finally - and briefly - the rabbit hopped off last Sunday to see The Angels' Share. Go see. It's quality. I won't explain what the angels' share is for the uninitiated. You'll just have to see the film.
Posted by white rabbit at 16:49

We drinkers are well aware of the Angel's Share. Damned thieves...

I was just involved in a circumcision discussion on facebook. A lot of people are against it, but a few of us women prefer a guy to be cut. The first time I saw the cover of the Two Virgins album, I wanted to know what the hell was wrong with John Lennon's dick. Uncut reminds me of geoduck clams. There's also the cleanliness issue. Yes you said 'soap and water' but not all guys are thorough. I can't imagine more of a turnoff and forget blow jobs. Thank god all my partners have been cut.

Just one American girl's opinion. I know it's not the popular one, but if I had a baby boy, he'd be circumcised and I'm not Jewish.

Hellz yes I signed that petition! Ridiculous. WTF has happened to common sense?
I gotta say I'm with JoJo on the circumcision issue.

Meanwhile in Zimbabwe government ministers have been circumcised because they believe it reduces the risk of AIDS.
Should the masses of women who want to sleep with Michael Gove demand the same in Britain?

Earl - Indeed. How they have the cheek to call themselves angels after behaviour like that is a mystery.

JoJo - all opinions welcome. As regards 'I wanted to know what the hell was wrong with John Lennon's dick' I can help. It was attached to the rest of John Lennon. A thoroughly unpleasant man IMO. As to the aesthetics of the penis, I can only quote - I thought it was Dorothy Parker but googling fails to produce a result - 'You wouldn't buy one in a store'. Investigations into the geoduck clam continue.

Masses of women want to have sex with Michael Gove? Are you quite sure???

sorry, rabbit, someone mentions the gove and you say john lennon was the unpleasant one?...! everything is relative.

and in answer to 'Should the masses of women who want to sleep with Michael Gove demand the same in Britain?' - as michael gove is simply an enormous prick they should cut the bit on the top off. and get the women some treatment.

i'm all for treating that pseudo-cigarette seriously, i mean it could have been something really dangerous - like an actual cigarette.

Project managers are no longer restricted to creating subtasks and then rolling them up into summary tasks. For Microsoft Project 2010 Download, you can create summary tasks first, and they can have dates that don't exactly match the roll-up dates of the subtasks.
Store, share, and reuse business process diagrams and subprocesses through Adobe Acrobat 9 Pro Extended Download integration with SharePoint 2010 Process Repository.
Acrobat 9 Pro helps business and creative professionals communicate and collaborate more effectively and securely with virtually anyone, anywhere. Unify a wide range of content in a single organized PDF Portfolio. Collaborate through electronic document reviews. Create and manage dynamic forms. And help protect sensitive information.