rabbit at the hop, an e-mail from Christine and Shelagh Delaney 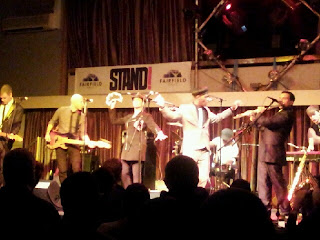 After the threat from Hank to find a way to come over and kick me in the head if I didn't go, it became inevitable that the rabbit would hop off to see The Selecter live at the Fairfield Halls, Croydon last Thursday. It was stonkingly good stuff - I'd quite forgotten what fun live music can be. The rabbit's companion for the evening was another ageing reprobate by the name of Bob - a serious Deadhead who turned up in a starburst tie dyed T-shirt and greeted the rabbit with an offer to buy him a Doom, an offer which was accepted.
The band came on just as the second Doom arrived, entering to the strains of Longshot A Kick De Bucket through the PA. The sheer energy was the first thing to hit home. 'I'm exhausted just watching them' announced Bob, plonking himself down on the merchandising table. Plus - Pauline Black (vocals) is such a little showboater - playing to the audience shamelessly with a twinkle to her eye. Gaps Hendrickson (also vocal) bounces like - well - Tigger.
Then the standards started piling up, Murder, My England (launched by Pauline getting all political 'I hate the EDL, I hate the BNP. This song is called My England but this is our England' - cue much cheering), Three Minute Wonder (launched by Pauline getting all personal 'You are all three minute wonders!' - How does she know? I wondered - assuming it means what I think it means).
There was only going to be one last finale to the main set - here it is compliments of rabbit phone cam services  (Hat Tip to Bob for stills) - On My Radio

Equally, there was only going to be one encore. The audience were chanting Too Much Pressure before the band even came back onstage. Then the band came back on and joined in the chant - as can be seen.

And then into Fatty Fatty. But even encores have to come to an end - as also can be seen...

The encore completed, the PA blasted out Toots and the Maytals' 54/46, which the rabbit was reminded while watching TV the next evening, also opens This Is England . Then Pauline Black comes over to the merchandising table to sign books and records - and was this near! (see pic) to a starstruck rabbit. 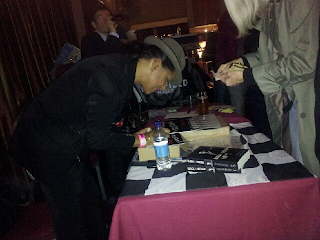 Oh what fun! On a completely different subject, I'm sure - without false modesty - that regular readers will agree that it was only a matter of time before Christine O'Donnell succumbed to the rabbit's charms. Sure enough, the rabbit was greeted this morning with an e-mail from Christine. The header read 'you're invited to a private meeting'. The little saucepot! The rabbit is already licking his lips and making his travel plans. So that there is no doubt, the message is headed 'Dear Andrew'. A gentleman will disclose no further details save to say that Christine has come up with a somewhat implausible cover story - presumably hoping to throw the media off the scent - that the meeting is to discuss the 2012 elections. Can't see anyone being fooled by that! 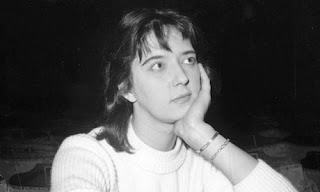 More seriously, the rabbit was sad to learn of the death of Shelagh Delaney at the age of 71. She wrote her play A Taste of Honey aged 17 after going to a Rattigan play and deciding she could do better. She was something of a one hit wonder but did produce other work of some - although - lesser note. Above is a pic of her from 1961. Frustratingly I can't find a quartet of photos from 1960 of her smoking a cigarette, She could make smoking a cigarette look the coolest thing ever, A dangerous talent...
Posted by white rabbit at 16:36

The only thing that could have made this post better would be if the little sauce pot had accompanied you to the live concert and sipped a Doom with you while smoking a cigarette.

Catchy - Thank you kindly. As to the rest - it's only a matter of time.

Nice! You're right - there's little better than seeing a live band. Looks like an excellent time! Only two Dooms? Geez. :)

Where Are all Those Angry Young Kitchen Sinks Now When We Need Them?