November in England II - poppies plus other musings 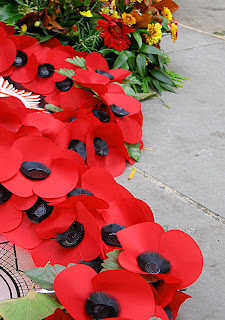 It is a matter of no particular consequence in the great scheme of things but the rabbit will not be wearing a poppy this year. ﻿ Basically as an act of protest at the increasing apparent orthodoxy that it is compulsory to wear one.
For overseas readers another short explanation is in order. In Britain and the Commonwealth Remembrance Day is observed on 11 November. In origin, it  recalls the  end of World War I on that date in 1918. Hostilities formally ended 'at the 11th hour of the 11th day of the 11th month' of 1918 with the German signing of the armistice. Of course it now includes the dead of World War II and subsequent wars and conflicts up to and including Afghanistan. Although two minutes of silence are observed on 11 November itself, the main observance is on the second Sunday of November, Remembrance Sunday. There are church services usually adjourning alfresco to the local war memorial and there is a national event at the Cenotaph at Whitehall.
The remembrance poppy originates with the red Flanders poppies of the battlefieklds of World War I and  an American woman, Moina Mitchell who promoted of a poem In Flanders Fields  - a mawkish and frankly pretty awful invitation - purportedly from the war dead - to carry on World War I. Red poppies began to be worn as a mark of remembrance.
And so it is today. Red poppies - made of some sort of stiff paper - are worn in the run up to Remembrance Sunday. Donations in exchange for the same go to the Royal British Legion.
Now in principle I have no problem with the way in which Remembrance Sunday is marked and have worn the poppy in the past. Remembrance is right, appropriate and can be healing. There is no glorification of war. It is not a recycling of Wilfred Owen's old lie. Although the Royal British Legion would not be my charity of choice, no doubt it does much good with the money raised by the poppy appeal.
But inevitably three things happen in the run-up to Remembrance Sunday. Firstly, the poppy wearing season gets longer. Traditionally, poppies were worn for the week before Remembrance Sunday. Now they start appearing in October. Secondly, the sense of pressurisation to conform and wear a poppy seems to increase with every passing year. For example, in a micro version of the insolence of office, a head teacher reportedly directed her staff to wear poppies. Thirdly, there is a heated debate about matters 1 and 2. This year it has even extended to the assembled mums of mumsnet. Nowhere is the apparent compulsion more apparent than on BBC television. Is it possible to appear on BBC tv without a poppy in the present season? Do they have some maniac at the doors of Broadcasting House with a bin full of poppies and a staple gun waiting to attack anyone presenting themselves sans poppy? I noticed that Benjamin Zepeniah on Question Time last week wore the white pacifist poppy but would the BBC actually allow you in a studio without any sort of poppy at this time of year? Evidence suggesting that the answer to this question is 'yes' is scant.
Veteran Channel 4 Newscaster Jon Snow does not wear a poppy. He holds to the entirely reasonable position that he chooses to wear a poppy on Remembrance Sunday itself but not otherwise. Of course a huge avalanche of odium is heaped on his head every November, particularly last year after he came out with the perhaps not entirely felicitous phrase poppy fascism. Below is Snow not wearing a poppy (nasty tie, Jon). 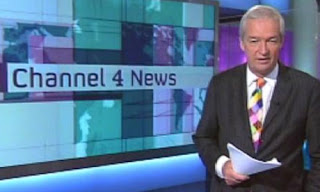 At least on the 12th November it won't matter for - well - 11 months. Completely changing the subject, the rabbit hopped off to see The Ides of March at the Greenwich Picture House. it's a good watch - go see. On one level its about politics but on another level it's about treachery, double dealing and bad faith - a cynic might say same thing really. One question struck me though - what chance would an agnostic who was opposed to the death penalty have of being elected President of the United States? Not much, I suspect. On the subject of President of the United States, is Obama feeling left out because he has yet to do anything catastrophic and heroically stupid on the foreign policy front?

How about attacking Iran? - that would be truly, madly and deeply dumb.

Completely changing the subject again, the rabbit saw a documentary about Everly Brothers tribute act Simon and Garfunkel on BBC1 last night. The documentary was actually about the Bmaking of the Bridge Over Troubled Water album. Paul Simon mentioned meeting a Vietnam Veteran who said that the troops in Vietnam listened to Cecilia and in particular to...
'Making love in the afternoon with Cecilia
Up in my bedroom making love
I got up to wash my face
When I come back to bed
Someone's taken my place'

A common problem, I'm sure all would agree. The vet's comment that when they heard that these lines were actually being broadcast, they realised they weer coming back to a very different America.

Some wag on YouTube comments that Garfunkel has one awesome moustache.
Posted by white rabbit at 14:02

Bring In Conscription For People Who Dont wear A Poppy!

Faux poppies are sold in the US by veterans organizations for fund-raising, and that's the only time they are worn here - as notice that you've donated to their cause.

I've heard the same thing from Vietnam vets about Cecilia, and they were correct in their assumption about returning to a different America.

I tend to go against anything made popular, so I support your non wearing of the poppy, months before!

One of my favorite lines by Paul Simon "Somewhere, in a burst of glory, the sound becomes the song."
I can't remember the name of the song itself, as it is on a mixed CD, but... the beginning of it sort of sounds like what he is singing about. Or the beginnings of time or sound itself. Very cool.

Fascinating, did not know about the tradition of wearing the poppy. You teach me stuff and make me feel all cosmopolitan and shit! :)

Did you ever see "Two lane Blacktop"? Garfunkel was involved with Laurie Bird, actress in that (hippie landmark) movie and was devastated for years after her suicide (in his apartment). Very sad. I liked her.

The poppy thing is definitely not as huge in the states as it is in the UK and even Canada. I see it on Facebook a lot, but not much from my US friends.

On another note, 11/11/11 is also Nigel Tufnel Day because 'these go to 11'. So embrace your inner Spinal Tap and observe that instead.

Also, I thought the newscaster's tie was cool.

Tony - don't give them ideas! Actually they'd probably conclude we were 'insufficiently malleable' - apparently malleability is a recruitment criterion.


Catchy/Sybil/JoJo - it sounds like the thing is more in proportion in North America.

Daisy - it's a pleasure and shit.

Little Flower - The moustache thing does appeal to the surrealist in me.

Sybil/JoJo - quite so re Nigel Tufnel. It's also known as 'Corduroy Day' I'm told as 111111 looks like corduroy.

For whatever it's worth, tomorrow is veteran's day here in the US and we wear nothing in particular to celebrate it. I think we used to wear flags, but the socialists banned that.

Tomorrow night I'm going to a concert where a band is going to play the entire Dark Side of the Moon concert note for note. They're not a tribute band so much as just an album band, or something.