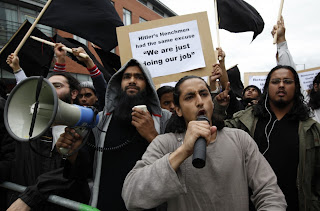 The ineffably useless Home Secretary Theresa May ﻿has taken a break from letting anyone who wants to enter the country do so by standing down the Borders Agency to save money (or something) while simultaneously talking tough on immigration to ban the Islamist organisation Muslims Against Crusades. Let there be no doubt that Muslims against Crusades are an odious shower, the mirror image of their fringe christian equivalent Westboro Baptist Church (whose god sure does a lot of hating but I digress). Both target the bereaved via military funerals (WBC) or Remembrance Day events (Muslims against Crusades). Now it is not necessary to support the idiot military adventures in Iraq or Afghanistan (I don't) or to fail to recognise the enormity of the damage done to the hapless population of those countries to intensely dislike gloating, sneering and heckling the bereaved and what ought to be their events. A predecessor organisation of Muslims Against Crusades planned a march through Wooton Bassett - a particularly sensitive location as it was there until very recently the bodies of British soldiers repatriated from Iraq and Afghanistan were flown in. The march - which no doubt would have been hugely provocative and offensive was banned.
These loons want Europe to be a caliphate. Frankly, I have no wish to live in their - or anyone else's - caliphate. What do I think of the ban?
I'm against it 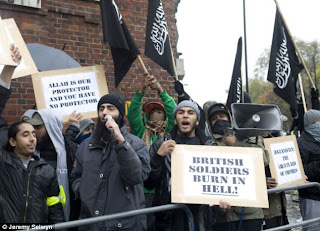 ﻿I'm against it for two reasons, one of principle and one practical. Firstly, freedom of speech includes the right of odious people to say odious things. There is a limit to free speech, namely when one person's freedom of speech threatens or injures another person or persons. So where these individuals incite racial (or more accurately religious) hatred then fine, prosecute them. We have laws against racial and religious hatred We also have public order offences by the bucketload. Again, use thesse laws where appropriate. What does banning this shower add to anything?
That is the practical objection. The ban is merely pointless posture politics, its timing being due to the imminence of Remembrance Sunday and the usual Islamist threat to disrupt ceremonies and made by a politican in trouble. One suspects distraction techniques in play. Organisations don't disrupt ceremonies. Individuals and groups do. Such individuals and groups are in no way disabled from disruptions by this banning.
Theresa May announced in banning the group 'I am satisfied Muslims Against Crusades is simply another name for an organisation already proscribed under a number of names including Al Ghurabaa, The Saved Sect, Al-Muhajiroun and Islam4UK'
Oh well spotted! So that's what they do! Who would have known! As soon as one group is banned they set up another. Or more accurately they change the name. The new group cannot be banned immediately as they haven't done anything yet. When they do they are banned and another group pops up. And so on.
And thus the point of this serial banning exercise is? Okay - to answer a rhetorical questions - it does no good at all. Below with Hat Tip to Left Foot Forward is Theresa May banning Islamist groups, sorry playing Whack A Mole.
Posted by white rabbit at 18:07

"pointless posture politics"
Wonderful way with words you have.

Free speech must be upheld regardless how tasteless and rude.

A Side-Issue,But.....It's interesting who gets banned & who doesn't.The EDL for instance.Too many Tory voters in the EDL?