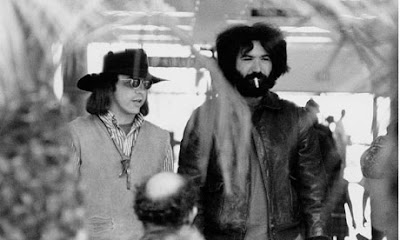 The rabbit is supposed to be having a brief sabbatical but finds himself with a few free moments to record the death of Owsley 'Bear' Stanley (left in pic - well obviously) in a car crash in Australia aged 76. Owsley was mostly noted for manufacturing LSD but also was the Grateful Dead - a popular beat combo's -sound engineer.

Eccentric doesn't do justice to the guy. Jimi Hendrix's Purple Haze is a reference to his acid. Owsley's acid was mostly called - erm - Owsley's acid and figures in the rabbit's first (unpublished) novel White Rabbit - sorry had to slip that one in! He started manufacturing LSD when it was legal but carried on after it became illegal. In the end he was inevitably busted and ran the highly amusing (or at least the rabbit is amused) defence that 350,000 tabs of acid were for - erm - personal use. Result: 3 years inside.

Stanley's eccentricities did not end there - he believed that carbohydrates poisoned the body and vegetables interfered with nutrition. In 2005 he contracted throat cancer, attributing his survival to starving the tumour of glucose through diet. Well - erm - apparently it worked. As a sound engineer, the fact that the Dead's archive is hugely with us is down to his diligence but as an obsessive, his sound systems were often less than practical and took forever to put up and take down.

His final eccentric project was - believing that global warming was part of a natural cycle and not man made and anticipating a new ice age as presumably the next stage in the cycle - moving to the Australian outback as the safest place to be in for that sort of event. He had four children including a son called Starfinder and a daughter called Redbird. Let Garcia have the final word: 'there's nothing wrong with Bear that a few billion less brain cells wouldn't cure'.

Oh and he also created this...

Fitting tribute. Thank you -- and thank you, Owsley.

Great tribute to Bear. Can't believe he died so tragically.

I wish I had some of that Owsley Purple Haze Acid...

& it was a rather cool way to go.......Although,he would have made a great companion to be sat next too in some future Old Folks Home!
RIP The Bear.......I wonder if he took his chemistry set with him to Heaven?

With that sort of attitude on global warming he would have been a natural for leader of the opposition in Australia - and the LSD would have useful in getting to grips with some of their other policies. An untimely death.

The passing of a legend.

Nice tribute. Sad ending to an interesting and important fellow. It should be noted that Purple Haze was not Owsley's. From the NY Times: "He did not, contrary to popular lore, release a product called Purple Haze; in interviews, he sounded quite miffed that anything emerging from his laboratory could be thought to cause haziness rather than the crystalline clarity for which he personally vouched."

Sorry to hear this. First, Liz. Now this. Damn.

Fittingly, my word verification is: mental.

The Stanley family has started a nonprofit foundation to preserve his tapes...
owsleystanlyfoundation.org

Both could work in an emergency, but they weren't practical solutions to the problem at hand: what we could reasonably wear on the rare occasions that we needed to go out. It's also a chance for fans to reconnect with their favorites, revisiting their journeys on the show.Financial incentive: The winner of "The Biggest Loser" receives $100,000, home gym equipment and a trip to Universal Orlando Resort in Florida.

"I honestly didn't think that we would be able to come together as fast as we did, just having so many new pieces (and) bringing in Anthony. He was addicted pleasing Coach Outlet Clearance others. However, when something out of the ordinary happens like a pandemic our brains may process the experience through dreaming.

Kids worked. But the fact is, some primary voters supported Sanders because they didn have any other not Hillary option in 2016. All content which you access through this Cheap Nike Air Force 1 Site may New Air Jordan Shoes be changed at News sole discretion and without notice.. It's hard to MK Outlet figure out whether a very clear, invisible manufacturing recession is going to turn into a more general recession..

Nothing Air Force 1 In Store contained on the Web Site should be construed as granting, by implication, estoppel, or otherwise, any license or right to use any Trademark displayed on the Web Site without our written permission or the third party that may own Cheap Yeezy Shoes Sale the applicable Trademark.

BusinessDow Jones posts worst 1st QTR ever; Alabama unemployment benefits come into focusUpdated Mar 31, 2020; Posted Mar 31, 2020A television screen on the floor of the New York Stock Exchange headlines market activity, Monday, Jordan Shoes For Sale March 9, 2020. Those meetings go by so fast because they're not that long, so it's just like that."The players do everything Yeezy Shoes For Sale else on their own..