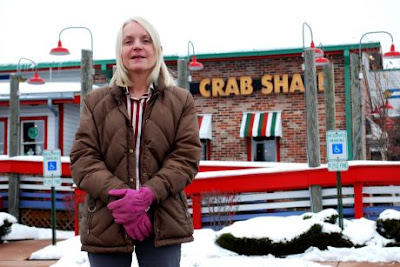 Ever at the cutting edge of legal blogging, a case in a place called Gurnee - which is apparently in Illinois - has not escaped the rabbit's attention. The above chapess is called Carolee (seriously) Bildsten and, finding herself lonely and hungry on November the 9th last year, she repaired to a local establishment named Joe’s Crab Shack. She ordered a glass of wine, and dinner. And then another glass of wine. At the end of the meal, our heroine reached into her pocket to take out her credit card – only to find much to her surprise - that it wasn’t there.

She told the bartender that she was going to go home for the money, set off (despite a broken foot) and fell over. 'Partly, I was intoxicated, so that had something to do with it' Carolee helpfully explained. A police officer pitched up, told her she would be arrested if she didn't pay Joe's bill and was 'kind enough to take me home' as Carolee later elaborated.
How was the officer's kindness repaid? Not well I fear. Carolee went to her bedroom when the officer entered thus startling her. The police allege that she raised a 'clear, rigid feminine pleasure device' over her head and went at the officer. In other words threatened him with a dildo. She is running self-defence.
Carolee sounds a bit of a sad case, she has a degree, worked for many years as a dietician but is 'currently unemployed' and an active member of Alcoholics Anonymous. 'I’m working on improving my life to avoid any further police encounters' she said.
Very wise too. Let's hope for the best for her.
On a completely different subject, in case anyone has missed it, here is The King's Speech parody, The President's Speech. What can this mean? Hat Tip to Mahal.

Above is the London 2012 Olympic logo and pretty stupid it is too. The Iranians have claimed that the logo spells ZION and are threatening a boycott. Let the rabbit put their minds to rest at once. Of course the logo doesn't spell ZION. What a silly theory. It is of course Lisa Simpson committing a sex act. Trust this clarifies matters.


Imagine the rabbit's surprise when yet another e-mail from Christine O'Donnell pops into his inbox. I wonder if Christine knows that there is legislation against stalking in this country. I expect she would claim it was an act of love. That's the usual explanation given by stalkers. Anyway, Christine explains that she has been asked to participate in Dancing With Stars, which is apparently the American equivalent of Strictly Come Dancing. Sadly Christine has declined the invitation on the ground that she is too busy writing a book. A great shame, I'm sure all will agree. She could have become the American equivalent of that other dancing right wing politician Ann Widdecombe here doing her impersonation of Kate Winslet in Titanic on Strictly Come Dancing. Very convincing too, I'm sure you'll all agree. They must have been seperated at birth. 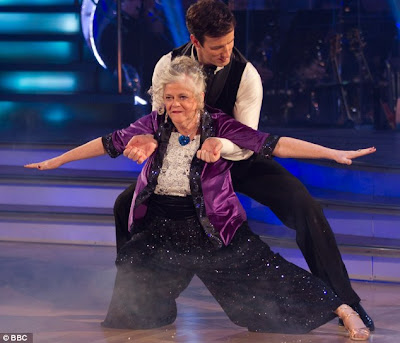 That's a horrific logo for the London Olympics. And someone got paid big bucks for it...

WOOT!! It's the state next to mine bebe!!

and btw. saw Alice in wonderland, the disney cartoon last night. will be rewatching the tim burton version tonight.

OMG IT DOES LOOK LIKE LISA SIMPSON PERFORMING A SEX ACT!!!! HAHAHAHAHAHA

I posted the Gurnee story last year on my Tuesday Titillation. Are you channeling me? ;-)

You even commented that "she's damn ugly." The story is worth repeating.

Did Carolee 'threaten' the hapless plod with a rampant rabbit?!

I really think we should be told, y'know.

Maybe she went to that sex shop that was swapping guns for sex toys or this knife exchange.

First off, may I say... You are in RARE form! I love the way you tell a story or weave one, or whatever. We (hub and I were rolling... well, you know, laughing a LOT!)

Peace and thanks for all the laughs.
xo

PS I had not read the comments before commenting myself... just had to say touche Tony! Just when I thought it couldn't get any better.

Thanks for that! grinning.