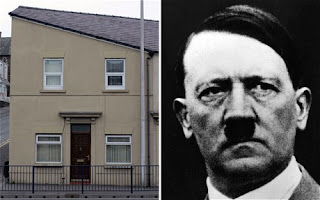 The rabbit is still time poor but here is a little goodie from rabbit on the hop to keep the readership going. A house in Swansea (that's in South Wales, overseas readers) has achieved some notoriety as bearing a remarkable resemblance to the Late Adolf Hitler. They could have been seperated at  birth, I'm sure all will agree. This one has been doing the rounds on Twitter, much to the bemusement of the 70 year old occupier of Casa Adolf (no, it's not really called that) who doesn't even know what Twitter is.

A neighbour is quoted as saying 'People are joking that the house is the third on the Reich and that we live on the Western Front. You have to see the funny side of life sometimes'.


Indeed you do. To this end, and with Hat Tip to mahal, here is some informative stuff from The Onion. In the meantime the rabbit has found time to start a heated debate in the Guardian letters page concerning whether horses know it is their birthday. Here are links to my original letter -it's the bottom one - also printed in the paper edition I hasten to add - as was this reply published today. I don't know what to say in reply to Mr Spooner. Anyone got any ideas? Oh - and here is Einstein - the horse who sparked this debate - and friends - or do horses have friends? 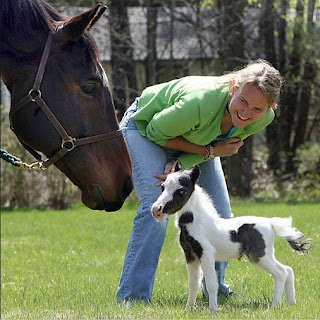 Oh, PS My Hitler comment wasn't a dig towards the rabbit, I actually thought that was kind of humorous slant, Casa Hitler. My comment was more of an exasperation with the complete freakishness of the human condition in general.

Rabbit! Glad you're alive and well!
As far as horses, I grew up on horses and therefore, I was around them my entire life. They don't know their birthday any more than dogs, cats or otherwise. I mean, not one ever told me it was their birthday, or acted all uppity about me riding them on a particular day (except one horse, but she always acted uppity). Plus, that horse isn't wearing a party hat. Duh.
They do have friends, though.

SL- If you make a big fuss they know something is up. Actually they pick up on a tiny fuss, as well. But you are right. Without the party hat they don't know EXACTLY what is up.

Well, Hitler was a house painter.

As for animal intelligence:

Come on--My dog is smarter than the average US Right Winger (no names here).

We know animals have intelligence and show more nouse than quite a few people. As the other person pointed out: how do you know what they know or don't know. Especially since they can't talk!

My dog Rocky not only knows when it is Christmas but relishes opening his presents and celebrating.

Hmm, Am I reading this correctly..People are saying that the house reminds them of Hitler? I'm assuming the architecture and not the be-musings going on inside.
-Kat
Rabbits In The House

I gotta say, I'm just not seein' it in the house at all. lol

As to the Hitler Doppelganger house (laugh), some motherfucker had WAY too much time on his/her hands.