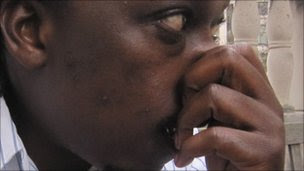 Other legal blogs - or blawgs are they are sometimes vulgarly known - can eat their hearts out. The rabbit is at the cutting edge of legal blogging yet again with
a topic that has exercised the finest jurisprudential minds way back to - erm - someone or the other, namely is farting legal?

This grave and weighty question is now somewhat controversial in Malawi due to the Local Courts Bill, about to begin its majestic progress through the Malawian parliament and containing the following: 'any person who vitiates the atmosphere in any place so as to make it noxious to the public, to the health of persons in general dwelling or carrying on business in the neighbourhood or passing along a public way shall be guilty of a misdemeanour'.

Malawian Justice Minister George Chaponda who is actually a trained lawyer opines that the new bill would criminalise flatulence to promote 'public decency'. 'Just go to the toilet when you feel like farting' our man has helpfully explained.

This unusual construction of the clause in the bill has been contradicted by Solicitor General Anthony Kamanga, who says the reference to 'fouling the air' means pollution. 'How any reasonable or sensible person can construe the provision to criminalising farting in public is beyond me' he said, adding that the prohibition contained in the new law has been in place since 1929.

Speaking as a reasonable or sensible rabbit, there is no dissent from here. Mr Chaponda is warming to his theme, however. 'Would you be happy to see people farting anyhow?' he enquired on Malawi's Capital radio. Anyone with an answer to this question should drop a line forthwith to the minister at...

No doubt Mr Chaponda would find any feedback valuable. Best not to mention the clip below to him, though... Hat Tip to Mahal

JoJo - Best not mention this point of view to Mr Chaponda. He takes a dim view of that sort of thing...

Not so long ago a man in Styria was arrested for farting. This is was considered by the local police to be a deliberate a provocative act rather than an act of nature - and the punter apologized and paid the fine.

That video is funny.
But that law - I mean, how could you even prove who did it? People would start framing people! Crazy!
But funny.

Sybil - Stitching someone up as an alleged farter explores the wider shores of surreal! :d

sybil - it would be decided under the maxim of equity that 'he who smelled it, dealt it'.

my favourite bit of trivia is that hastings banda, much-titled dictator of malawi for many years had previously been a gp in north shields and between 1940-45 lived about 3 streets from where my father was born and lived at that time. weird or what. i don't remember my father farting a lot, though my children complain that i do. there is probably some connection with the late dictator...

Our City Council meetings in New Albany are usually quite a show. I don't know if anyone would even notice if someone farted.

Shirley - If your council is anything like Lambeth Council when I had the utterly tedious experience of being a councillor for 3 years way back when, you couldn't hear people scream in council meetings let alone fart.

Ha! My husband would be on death row over there!!

My experiences as a nurse lead me to believe that farting should be considered a spectrum offence if criminalised; after all, are there not various categories of fart, ranging from the silent but deadly to the extremely loud but lacking in toxicity, with an entire host of fluffs and squawks in between.
However, difficulties with establishing the true identity of the Farter notwithstanding,there would very likely be problems relating to direct intent; recklessness in such a situation may well be far easier.
I would suggest that all those at risk of farting in a public place be wary of pickled eggs,sweet and sour onions, cheese, chilli, and a damned straight balti from the local curry establishment.

The Great Henry Purcell, known for his contributions to English Baroque music and was described by John Dryden as:

So ceas'd the rival Crew when Purcell came,
They Sung no more, or only Sung his Fame.
Struck dumb they all admir'd the God-like Man,
The God-like Man,
Alas, too soon retir'd,
As He too late began.
We beg not Hell, our Orpheus to restore,
Had He been there,
Their Sovereign's fear
Had sent Him back before.
The pow'r of Harmony too well they know,
He long e'er this had Tun'd their jarring Sphere,
And left no Hell below.

The Heav'nly Choir, who heard his Notes from high,
Let down the Scale of Music from the Sky:
They handed him along,
And all the way He taught, and all the way they Sung.
Ye Brethren of the Lyre, and tuneful Voice,
Lament his Lot: but at your own rejoice.
Now live secure and linger out your days,
The Gods are pleas'd alone with Purcell's Lays,
Nor know to mend their Choice.


Put it thus in one of his songs:
Pox on you for a fop, your stomach’s too queasy. Cannot I belch and fart, you coxcomb to ease me? What if I
let fly in your face and shall please ye?
Fogh, fogh, how sour he smells. Now he’s at it again. Out ye beast, I never met so nasty a man. I’m not able
to bear it, what the devil d’ye mean?
No less than a Caesar decreed with great reason, no restraint should be laid on the bum or the weason, for
belching and farting were always in season.

This great work is performed at: http://www.youtube.com/watch?v=vN3wpR-l1pk

They should definitely lock Sarah Palin up:
www.youtube.com/watch?v=-NGXlsqPL2A&feature=player_embedded
Or is not guilty by reason of insanity defence to the of the heinous crime of farting?