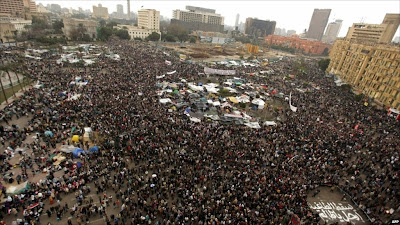 The picture above is of Tahrir Square on day 13 of the protests in Egypt. What is there left to say? These guys (of both genders) are magnificent. End of.

Except it's still not the end of. Mubarak and his cronies are hugely dug in and have tried every trick they can think of to cling on to power. The army is clearly hedging its bets so the regime blocks mobile phone networks, closes down facebook(!) sends its paid goons in to attack protesters - even down to the bizarre camel charge by camel drivers who were apparently told that their licences would not be renewed unless they turned up to give the protester a hard tiome. All to no avail so far - the protesters keep coming back and coming back.But the ruling clique aren't letting go of their ill gotten booty without having their fingers prised from the levers of power. Like any tyranny, they will not give in because they see the moral force of the opposing arguments. They will give in if - and only if - they are made to. 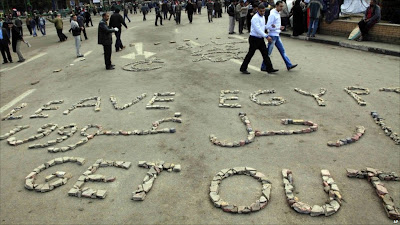 The protesters strength may be their weakness. This is a total bottom up grassroots protest. A certain amount of paranoid rubbish has been doing the rounds in the western press from commentators of the 'Mad Mel' Phillips persuasion to the effect that that the events in Egypt carry the danger of an Islamist regime. The (small minority in Egypt) Muslim Brotherhood bogeyman is wheeled out on cue in support of this proposition. This is plain nonsense. the deminstrations overwhelmingly have a secular and non-sectarian character (see image of Muslim with Koran and Copt with cross being carried through the crowds below). Behind this narrative is the unspoken proposition that though Mubarak may have ruled through a police force which pulled people's fingernails out but he was reliably biddable as regards whatever western interests were perceived to be in the middle east.

The game has moved on from that narrative and is up. But the danger is a fudge imposed on the Egyptians via assorted self-appointed honest brokers. Bottom up grassroots protests are wonderful but somehow an united voice needs to emerge - a voice that won't be pushed around. 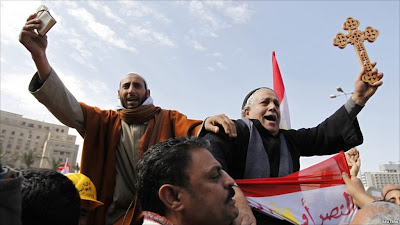 The Egyptians have ownership of the movement that has swept that country. No-one else. is entitled to claim or seek to hijack it. Support the Egyptian people and be glad for them
Posted by white rabbit at 17:51

I just wish everybody would learn to get along already... Elvis Costello comes to mind.

Whoever is in charge, will have to deal with jobs, education etc. With the capitalist crisis in bloom, the system can't provide. I see a series of governments, unless a Lenin arises.

Hamas has been guarding the Gaza border, to keep out revolution.

Nobody is demanding Sharia.

Renegade - I don't think it's so much the emergence of a personality (and we would disagree on the merits of Ulyanov) but a cogent programme forcefully put so that there isn't some sort of fudge leaving a mitigated form of the old regime still basically in control. The demonstratotrs are right in demanding that Mubarak just goes. As in now.