The chappie whose picture the rabbit has totally failed to upload despite devoting far too much time to trying, the rabbit has to report, is named Jure Skumavc and is an architect from Darwin, Australia. It would be noted if the bloody photo would upload has sustained a minor injury to his forehead. How so? I hear the rabbit's devoted readership cry.

'It wasn't a strong shot (when it hit me in the head)' he explained showing commendable tolerance. 'It probably just landed on an awkward sort of angle'. 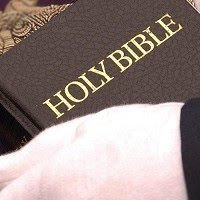 Apologies to anyone to whom this is stale news but it is new to the rabbit. A US woman has been charged with felony animal cruelty, saying she hanged her nephew's pit bull from a tree with an electrical cord and burned its body because the dog chewed on her Bible. Animal control officers said 65-year-old Miriam Smith of Spartanburg County, South Carolina told them she killed a female dog named Diamond because it was a 'devil dog' and she worried it could harm neighbourhood children.

It was interesting to note that the posting on historic events in Egypt attracted 4 comments and a piece on - erm - farting attracted 12. One of which from Mahal (who is also to blame for the rubbish above) relates to Sarah Palin - just follow the link.

On a better note, the rabbit was pleased to see the great survivor Marianne Faithfull on breakfast Tv this morning. She has a new album coming out called Horses and High Heels. Go buy. She's a class act and has paid her dues - from stardom to drug addiction, lost years and homelessness and back again. Here she is from the sixties with a rabbit favourite, Come and Stay With Me.

I am an American man, and I have decided to boycott American women. In a nutshell, American women are the most likely to cheat on you, to divorce you, to get fat, to steal half of your money in the divorce courts, don’t know how to cook or clean, don’t want to have children, etc. Therefore, what intelligent man would want to get involved with American women?

American women are generally immature, selfish, extremely arrogant and self-centered, mentally unstable, irresponsible, and highly unchaste. The behavior of most American women is utterly disgusting, to say the least.

Anonymous - Oh for goodness sake go away. I was feeling irritated enough anyway...

In other words, Anonymous can't get laid.

flying dildos,pingpong ball & dogs and anonymouses...............perhaps I should wear a hardhat when I come avisiting here?

That bitch in SC needs to be hung from a tree w/ an electrical cord and burned. What a sicko.

Wow... I'm nominating this for 'blog post title of the year' award!

I will repeat the words of the Great Henry Purcell:

No less than a Caesar decreed with great reason, no restraint should be laid on the bum or the weason, for
belching and farting were always in season.

Farting is far more interesting then a bit of local bother.

Sybil - indeed. Unlike Dave Whatsit no doubt. And a happy belated Valentines to you too.

JoJo - Don't pull your punches. Say what you mean...

Michael - Are you Lynn Truss in disguise? (he enquired terrace chant style)

and american men should definitely boycott american women - i can't believe those women did anything bad enough to deserve american men.

Keep up the boycott Anonymous - anything the reduce the competition!

I've just downloaded iStripper, so I can have the best virtual strippers on my taskbar.