The Wasteland, the tower and the Mail... 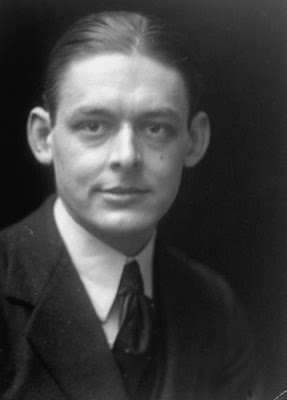 The fact that today is the first of April put me in mind of T.S.Eliot's The Wasteland (he's the bloke in the pic) and its endlessly quoted opening lines...

April is the cruellest month, breeding
Lilacs out of the dead land, mixing
Memory and desire, stirring
Dull roots with spring rain.

I'll resist the temptation to copy, paste and post more. The bit about a 'handful of dust' gave the title to Evelyn Waugh's worst novel. Just read it (The Wasteland, I mean not A Handful of Dust). It's simply stunning. Perfection 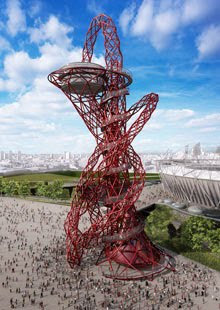 The tangled mass of metal above is as far from perfection as can be imagined. The Guardian newspaper has a long tradition of running spoof stories on the 1st April by way of an April Fool joke. The most famous was a seven page report on a nonexistent island called San Seriffe (which is actually a typeface) When I saw this story this morning I assumed it must be an April Fool joke.

Designs for what will be Britain's biggest piece of public art, a 120 metres tall looping tower by the artist Anish Kapoor that people will be able to climb, giving spectacular views of London, were unveiled today by Boris Johnson, mayor of London.

Kapoor's Orbit, a vast, snaking steel structure, will dominate the 2012 Olympic park. It is being hailed as London's answer to the Eiffel tower and is part of an ambition to make the Olympics site a permanent visitor attraction.

The terrible truth has dawned on me. It is not a spoof. This is for real. I will speak slowly and loudly:

Please! Let's get this stupid, stupid, horrible looking thing stopped dead in its tracks at the idea stage. I know the Eiffel Tower was unpopular initially and people were sceptical about the London Eye but just look at the thing!


Finally, here are Dan and Dan with their take on thea British 'newspaper' that defies description in moderate language. You'll get the general idea from the clip.
<
Posted by white rabbit at 17:31

i love the clip, sugar, had no idea re dan & dan, but they are spot on! xoxoxo

as to the proposed tower...oh my!

(tell me the card made y'all laugh out loud!)

(if it didn't, please accept my most profound and sincere apology!)

Well a least it will be down in London. Did you see the piece about London Underground being used a cheaper Large Hadron Collider.
You must be gutted to hear about elland road being shared with Bradford, can't remember if its City or P.A., now that they have sold the site for Morrisons first super super store.

Savvy - Dan and Dan are whoilly unknown but seem to be having some fun ;)

As to the Tower of Horrors...

Findon - Cheek! I do remember the park Avenue ground from when I was a boy. What a dump! I'm more worried about ending in the playoffs where I wouldn't bet tuppence on the whites beating anybody if the other lot's boots were tied together by the laces...

That ugly twisted metal thing is actually going to be built? Who designs this crap? And who thinks it's any good?

JoJo - Why anybody can take seriously the idea of building this - erm - object is a mystery to me.

The tower fucking sucks. It's a damn eye sore.