The behaviour of the right wing press is getting startling in its odiousness - even for them. Having concluded that the election was a shoo in for 'Dave' and Murdoch senior having thus committed the Sun and News of the World, things have gone badly awry - notably because of the Lib Dem surge and Cleggmania.
It's no more Mr Nice Guy for the Murdoch press, the Daily Mail and the Torygraph. The rabbit is no huge fan of Nick Clegg but some of the bile being avalanched on his head by a rattled Tory press is beyond the pale. 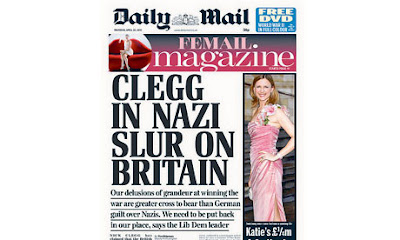 The above will give something of the flavour of the attack dogs - namely demented. The route to 'Nazi slur' is convoluted to say the least. In fact if it were not so odious the 'story' would be a joke. The Daily Mail is also at pains to point out that Clegg's father is half Russian, his mother Dutch and his wife Spanish.

Not to be outdone, the Torygraph has a story, as someone pointed out in as big a banner headline as 9/11 merited, 'revealing' (this had already been declared and was a matter of public record) that some donors had paid money directly into his bank account to pay a researcher.

Meanwhile all is not well in the Murdochbunker. James ('Baby Doch') Murdoch and the startlingly redheaded Rebekah Wade managed to slip their care in the community people and busted into the newsroom of the Independent 'see cartoon above), much to the surprise of the assembled hacks. The Independent had the temerity to have distributed free copies with a wraparound front page announcing 'Rupert Murdoch won't decide this election - you will'.

Baby Doch stormed up to the Independent's editor in chief.

'What are you fucking playing at?' he bellowed. Tsk! Such pottymouth is a bad example to His Rupertness's subjects. Baby Doch and Ms Wade were steered into the editor in chief's office where a heated debate took place.

Personally, I'd have called security to chuck them out.

One matter that has attracted comment is how the growth of the internet has created a much more open debate than that dictated by the usual suspects. This may explain in part their discomnfiture. The rabbit can only suggest that all people of goodwill cast their votes to indicate their disobedience of Murdoch, the Mail, the Torygraph. The whole motley crew...

Indeed, the episode with the Indie being under siege by the two twats is most bizarre, they are most definitely rattled and I agree with you, in that we should mark the 6th as a chance to skewer the odious Murdoch universe.

Do people really still read newspapers in your country?

I have always contended that the Internet has made it much easier for people to find the truth of any story. Newspapers can print all the rubbish they want, but the truth is always out there somewhere in cyberpace in comments, blogs, tweets, and posts of individuals who have no financial interest in selling papers.

The bizarre episode of the attack on the Indie shows up the ludicrous self importance of the Murdoch Mafia. They have had unmerited power for far too long and should be exposed for the deeply obnoxious creeps that they are. The good news is that the web is enabling this to happen and they can't stop it. Keep spreading the truth White Rabbit. It's the strongest weapon against Murdoch and toadies.