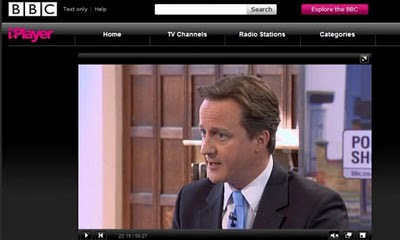 With Hat Tip to Daniel Hoffman-Gill, here is a pic of 'Dave' with subliminal message to the right. Talking of posh, here is a clip called Gap Yah which has gone viral on YouTube.

Continuing on the posh theme, the Guardian's April Fool spoof (the proper one, not the one that was real but ought to have been a spoof as regards the Tower of Horrors was to the effect that Labourr strategists were planning to cash in on Brown's dour hard man image. Some mock up posters were shown. The tragedy is that they were hugely better than anything that Labour will come up with for real (see below). I'm offskies down to London now. Happy Easter to all as wants such wishes. I tried to find an orthodox choir online for a bit of Easter music (okay, it's not the orthodox Easter but let's not get technical) but a combination of sound failure and confusion over choices defeated that plan for now. Any ideas Android? 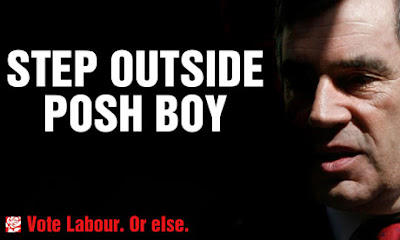 Oh and as a parting shot - as it were - if you feel the urge to slap a politician, get slapping on the slapometer . 'Dave' strikes me as a bit - okay a lot - underslapped so get redressing the balance.

Oh it felt good to cuff that post twat around the face.

Thanks Pal! Youve Just Turned Me Into A Slapper !

Wow. The Slapometer even allowed this American a shot! Sweeeeeet.

JoJo - LMAO - Are you quite all right, dear?

What, you don't know that song? Grampa Potts sang it in Chitty Chitty Bang Bang! And thanks to your post it's been stuck in my head all weekend. Am I the only person who remembers that movie?

Going to slap Dave around now.

It looked like Brown was taking the real beating though. He was in the "everyone" lead with 1814721 slaps.
I'm actually giddy. And a wee bit frightened.

JoJo - Sorry to have invaded your head. I once had an entire chatroom complaining that I had sent the Kinks' Lola round and round theoir heads..

Little Flower - A good slap is good for the soul.