That thing with fists... 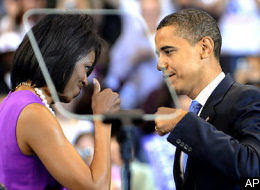 The interesting thing about the Obama campaign is the amount of utterly demented bile that is being poured on his head by right wing 'commentators'. The latest bilefest comes from those sweet people at Fox 'News'. The picture shows the Obamas doing something we are all familiar with but nobody quite seems to know what to call. You know - the bit where people clench their fists and touch knuckles back of hand up. Someone called E.D. Hill, a Fox presenter is in a spot of bother for referring to the Obamas as being engaged in a 'terrorist fist jab' Huh??? Some moron on something called HumanEvents.com http://www.humanevents.com/ - referrred to "Hezbollah-style fist-jabbing". Yeah right, Hezbollah do little else..
The unpleasantness from Fox doesn't end there. The old charmers posted a graphic during a discussion on Michelle Obama: "Outraged Liberals: Stop Picking on Obama's Baby Mama!" Top that for offensive. Okay, they will in due course...
Of course the smearing is not confined to Fox or the mainstream media. There is a cottage industry of bloggers cranking up the smears. Prominent among the UK practitioners of this 'art' is Mad Mel aka Melanie Phillips in her Spectator blog. take a look - it's fascinating in the same sense that a car crash is fascinating http://www.spectator.co.uk/melaniephillips/.
This sort of stuff is going to run and run so to save time and effort here is a brief synopsis: 'Obama is a Muslim and an Al-Qaeda agent whose real name is Osama. He has a scary invisible giant beard, hates freedom, hates whitey, is surrounded by anti-semites and would like to murder you all in your beds'. Okay - I exaggerate but not much.
What it is that so agitates the spittle flecked loons is a matter for debate. My difficulty with Obama is somewhat different. He is plainly vigorously tacking to the right to get elected. A few examples: he is pro death penalty despite recognising (it could hardly be denied) that the death penalty impacts disproportionately on the black population. He had shown some understanding of the plight of the Palestinians but has ended up trying to outbid the field in drooling and drivelling over the odious AIPAC. He criticised Clinton (H) for joining the board of Wal-Mart but then appoints someone called Jason Furman, a prominent defender of Wal-Mart to head his economics team. On the subject of names and economic advisers, another is called Austan Goolsbee - now that's up there with Tangerine LeBeau in the list of improbable names.
I have no great expectations of Obama if he is elected. He does bring some strange creatures out from under their stones, though.
Posted by white rabbit at 12:08

I love how people can take something like this and turn it into that.

Your concerns at least seem intelligent and give pause for thought...

Did your copy of "Time" magazine arrive late or something?

The not-so-subtle racism used by FOX News is no shock to anyone in this country.

Earl - I'm amazed by some of the stuff coming out. the latest one - which amuses me hugely - is the theory that Obama is the antichrist. Well they hedge it as a 'maybe' but they're obviously hopeful...

It's a hip-hop thing. Everyone does it. It's this generation's version of the high-five.

The fact that the news is so confused, shows what out-of-touch elitists they are.

It's just a dap. How hard is that to get right? Folks have been fist bumping forever. Fuckin' Faux News.

ill-judged nonsense - speaking as a highly placed member of the whitey-hating beard-wearing underground, i can confirm hezbollah do the iranian high ten as any fule kno!

Hi suck fucks. I'm just checking out Barnfed Bills links and his whole zoo crew. I'm going to start visiting you all regularly because your a pack of cunts and I love being called dirty names. It makes me all sexy.

Hellengradsluthobag: Don't I know you from college?