We know what you did last summer - sorry weekend.... 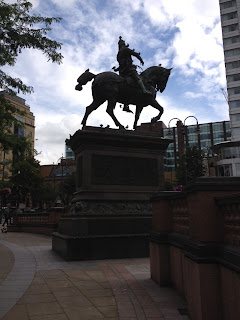 Well you'll know what I did last weekend after you've read this if you pluckily make it to the end. This blog isn't really about me as a general rule but rules are there to  be broken. Last weekend the rabbit and best friend set off on a sort of male Thelma and Louise (without the ending) type road trip to the rabbit's city of birth namely Leeds. Things did not start well when the rabbit grossly over-ran in court and had to tear down to Croydon and then up to Finchley to link with best friend and hire car. Only one and a half hours late. Then boot it up the M1.

Arriving about 8.30pm, the rabbit recalled that he hadn't eaten since a slice of toast and a banana sometime just after 7 that morning. We head off into the city centre. We found a French place called La Grillade. Never been there before but it was rather wonderful. Finding somewhere really good when you are seriously hungry and would eat just about anything is a wonderful thing. The rabbit had the Bavette a l' Echalotte with fries and salad and half a bottle of the house red. Thus fortified, the rabbit and companion headed back to the hotel to drink beer and talk until 1am. We like to talk.

The next morning, the rabbit went for a solo walk round the city centre as best friend went to visit cousin. I once came across a legend about a man who fell asleep for 30 years and woke up not realising what had happened but finding everything familiar but altered. It's a bit like that when you go back to a familiar place after a long absence. One thing that has not changed is the statue of the Black Prince in City Square. The medieval person had nothing whatsoever to do with Leeds (why the statue is there is obscure - the theory in Wikipedia is that it was bought and put in place to suck up to the future Edward VII) but there he is as some odd sort of local mascot and also very popular with pigeons as can be seen on close examination of pic above. 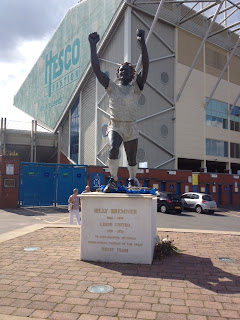 The rabbit had set off in bright sunshine but on the way back the heavens opened and he - and in particular his trousers got soaked. Who needs to pack a spare pair of trousers for a weekend break? Not the rabbit! Attempts to dry the trousers in the hotel room with a hair dryer were less than a conspicuous success.  But then inspiration came. This is a hotel. Hotels always have irons. The man on reception delegated to to let anyone else in, the rabbit repaired to the laundry room, removed his trousers and dried them in double quick time with a seriously hot iron. Problem solved. Then off to Elland Road, home of Leeds United Football Club. It's in the DNA. It's in the larger small rabbit's DNA too. He complains to me 'what have you done to me? I'm a South London boy' 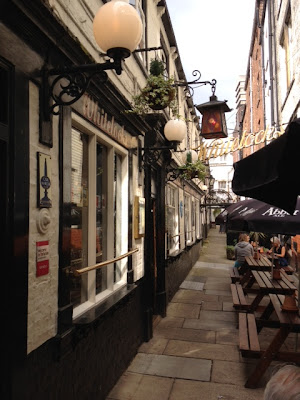 Saturday evening was spent in Whitelocks (above) - the oldest pub in Leeds (1715) and one seriously cool place. We had been looking forward to this and it did not disappoint. The rabbit had pork belly with garlic mash and something or the other jus washed down with  ... I forget what - one dark and one blonde beer but beyond that ... erm. This is turning into we know what you ate - sort of - last weekend. Then an odd thing happened. We decided on the cheese board. It arrived with frozen grapes. Cue much mystification from Thelma and Louise (male equivalents thereof). The waitress spoke hardly any English as seems to be custom these days. A lady from the next table came to the rescue. 'Jamie Oliver is very keen on frozen grapes' she explained helpfully.

Then on the Sunday off to the cricket at Headingley as threatened in the last posting here. rather like the trip around the city centre, it was odd but good to be back at Headingley after many years. For American readers, this was day 4 of the Test (5 day international game) between England and South Africa and the main event of the weekend. And again for American readers, yes cricket matches can go on for 5 days without a result. Makes sense to us. And yes the rain can hugely mess with them. 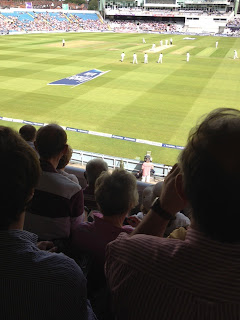 At first, all was well (see above). Then it started raining. The rain started hugely messing with the cricket. Below is the rain coming down, the open stands abandoned, their occupants under cover and the beginnings of ponding middle left just below plastic sheeting put on to try and protect the surface. 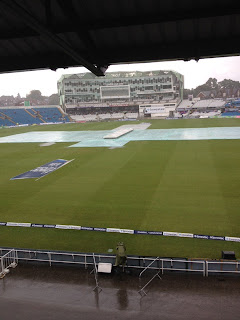 After a stop/start the game was abandoned for the day mid afternoon. It's a hazard of following cricket. So it goes but it was fun like it lasted. Cue another long journey back to the rabbit residence. Here are Thelma and Louise (rabbit on right in shades - note the Leeds 1975 European Cup Final Replica shirt) waiting in vain for the cricket to restart. 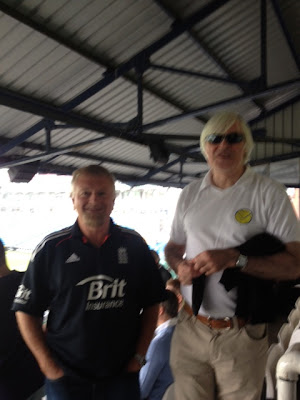 Oh and by way of further narcissism, I've been meaning to post the link to a podcast I did on the Charon QC blog a while ago. Now that's enough about me ;)
Posted by white rabbit at 21:17

Looks like you had a great time!! I had to look up what you had at the French restaurant and it sure sounds yummy!!

Love the recap of your weekend! Also, frozen grapes are awesome. I had them in 7th grade (friend's very Greek grandma had them) and I've had them ever since).

i have 2 words for you: ian porterfield.

the import of this may well be lost on everyone reading this but you. so be it.

Sybil - Well I learned something.

I am an American man, and I have decided to boycott American women. In a nutshell, American women are the most likely to cheat on you, to divorce you, to get fat, to steal half of your money in the divorce courts, don't know how to cook or clean, don't want to have children, etc. Therefore, what intelligent man would want to get involved with American women?

American women are generally immature, selfish, extremely arrogant and self-centered, mentally unstable, irresponsible, and highly unchaste. The behavior of most American women is utterly disgusting, to say the least.

Tens of millions of American men have had their lives completely destroyed by American women through the following crimes:

4. Financial destruction of men in divorce courts through alimony and support payments (women get up to 95 percent of their ex-husband's income and savings, as well as the house, car, etc)

5. Emotional destruction of men by ex-wives who have stolen their children from them and forbidden the fathers from having custody or contact with their own children

6. Divorced dads who commit suicide as a result

99.9 percent of American and western women are liars, hypocrities, and criminals, who support women committing crimes against men. Women refuse to condemn their fellow women who destroy men's lives. Silence means consent. Therefore, American women support and enjoy destroying men's lives and causing men to commit suicide. Apparently, American women think it is okay to be a criminal, just as long as you are a woman. Therefore, is it any surprise that a huge percent of American men no longer want anything to do with American women, other than using them for easy sex and then throwing them away?

A few more reasons to stay away from American women?

Over 50 percent of American women are single, without a boyfriend or husband; so the fact is most American men no longer want to marry American women. Let these worthless American women grow old living alone with their 10 cats.

Its good to be here, very nice post, the content is amazing, keep posting friend it will be

very helpful for everyone, Thanks for sharing. I really liked it.
Thanks And Regards
ppi claim

Professional trading signals delivered to your mobile phone every day.

Jordan Shoes For Sale are quite expensive.
Buying the right pair of New Air Jordan Shoes is paramount.
Given below are a few common mistakes that you may want to avoid when choosing Air Force One Sale.
Cheap Ray Ban Sunglasses are frequently regarded as a fashion trend.
Coach Bags Clearance,Let's keep it real.
We need resources for discount authentic designer Michael Kors Bags Outlet.
Coach Outlet Clearance Sale seems to be the best way to find what you want fast with ease and convenience.
MK Handbags Outlet are the most popular style of all.
The design of Coach Factory Outlet will affect the price tag when it's a high end designer purse.

If the oil gets too thick or if the glands are plugged because of Michael Kors Outlet Online inflammation, you may get a chalazion. They may start with a small area that is red, swollen, and sore Coach Outlet Sale or painful when touched. After a few days the pain usually goes away and a bump or lump remains..

He writes regularly and extensively on mental health concerns, the intersection of Coach Handbags Clearance technology and psychology, and advocating for greater acceptance of the importance and value of mental health in today's society. You can learn more about Dr. (2017).

Joel Edgerton might not be the first person you'd expect to make a movie based on Boy Erased, Garrard Conley's memoir of his experience in gay conversion therapy. (Edgerton was also the sole redeeming factor of Netflix's orc cop buddy flick Bright, in which he, nearly unrecognizable under pounds of makeup, turned in a terrific, emotive performance New Yeezy Shoes about 1,000 times better than Cheap Jordan Shoes For Men the movie deserved.) While Edgerton gives himself a juicy role in Boy Erased as the slightly deranged leader of a conversion therapy program, he's otherwise content to give center stage to the film's timely and important story. It stars Lucas Hedges as Conley's stand in, Jared Eamons, and Russell Crowe and Nicole Kidman as his well meaning but Cheap Air Force Ones conservative parents who Ray Ban Sunglasses Sale send him away in a misguided attempt to turn him straight.

The Superbly written article, if only all bloggers offered the same content as you, the internet would be a far better place.
Amazing content you published on your blog post. Thanks for sharing this!

Thank you for every other informative site.
Where else may just I get that type of info written in such an ideal way?