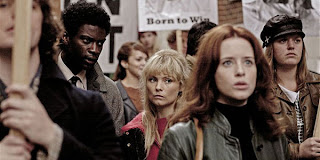 The rabbit has been having a difficult time since last posting. I'm fine - it's not about me - and I will tell all (well perhaps not quite all) in good time. But not now - bear with me. It is worth noting, though, that the BBC seems to have trumps having just seen the first part of new drama 6 parter White Heat.


It starts in the present with pivotal character Charlotte being shown round a house in Tufnell Park where she had lived as a student in 1965. The then young owner is an arrogant rich kid who auditions students as potential tenants. Charlotte is one of the chosen ones. The no longer young owner has died. We go to back to 1965. Claire Foy runs with the Charlotte character who is soon smoking, taking drugs and fornicating (the latter two activities taking place in rapid succession in accordance with the customs of the time). The story runs through the years to Greenham Common and the Falklands war and beyond to the present day. But tonight was episode one and much remains to become clear. The rabbit was rather taken by the surrealism of a party set to the backdrop of Winston Churchill's funeral and left wondering what the drug taken before the fornicating was. It could not have been LSD, the thought went, as that drug was rare in 1965 and pretty much impossible to combine with fornicating, at least in the early stages of its effects, but I digress.


It is written by Paula Milne who has fessed up to the obvious, namely that it is semi autobiographical. She is plainly a part of a generation with an interesting collection of back stories. Oh, and the soundtrack is quality. It starts with the inevitable ...


Not to mention this one - I'd quite forgotten it but researches reveal it was released in 1965. US readers, I fear you'll have to wait until White Heat shows up on a public service channel or whatever ...

Sounds like a good show!
but yes, sex on LSD is totally possible... and awesome...
Not that I would know.

I thought LSD was available thru at least 66! Kesey was using it for his early Acid Tests in La Honda and it was legal then. As to sex on it, I think that would be way too weird and surreal. Ew.

PS "White Heat" is my fave James Cagney movie. TOP OF THE WORLD!!!

Looking foward to the DVD.

Hang on Sloopy was a favorite of my way back in '65.

Sybil/JoJo - Great debating topic. I'm saying nothing ... JoJo - I think LSD was indeed available by 1965, just not very widely. I'm not sure when it was made illegal here but suspect it was surely after the states made it illegal.

Catchy - Indeed. Now why would anyone want to be called 'Sloopy'? Sounds vaguely like Snoopy with a consonant change.

Yes, LSD was available in 1965, but Jack, the character who gives Charlotte the tab, says "this is a happy pill", which leaves one guessing as to what exactly it was.

We see Victor actually tripping in the Second Episode. Given the difference in the way Jack and Charlotte are portrayed in contrast to Victor, I think it was probably an amphetimine rather than acid.

BTW, there are ways for people in the US to see this through iPlayer.

And the inevitable torrent option, but I discourage using torrents.

Hint "VPN". Witopia, but it works best with Linux as does something called get-iPlayer.