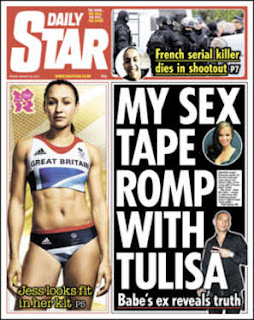 Passing through Leicester railway station this morning, the rabbit went to buy a newspaper. No, not the above one. The front page of the Daily Star did however attract the rabbit's attention. It was one of those 'do I inhabit a parallel universe or does everyone else - or at least a very large number of other people?' moments. I hadn't the faintest idea what the headline meant. I mentioned this to the woman behind the counter as I bought my daily dose of liberal rhubarb - sorry probably the best daily newspaper in the world.


Nope. Never seen it. Heard of it, though. One of those gruesome talent shows. probably something to do with Simon Cowell. I'd sooner stick my appendage in the blender than watch it. No, not literally. Investigations followed.


Tulisa is named Tulisa Contostavlos and - apart from being a judge (sic) on the X Factor was formerly a singer with something called N-Dubz. Someone wanted to sell a sexually explicit tape of her for £500,000. Details remain obscure save to say that she is apparently giving someone mouth to penis resuscitation.


'Moi?' cried our heroine. '100% fake', it was announced on her behalf. 'Tulisa has categorically never allowed anyone to film her having sex'.


Except the tape isn't fake, it emerges. It's 100% genuine. Plus our heroine now has an injunction prohibiting anyone disclosing - erm - images of 'an intimate moment'.


If anyone cares, the recipient of her attentions is apparently named Justin Edwards aka DJ Ultra. Inevitably, Tulisa has addressed her adoring public on YouTube. It's like the Queen's Christmas broadcast save that Christmas has come (very) early for drooling idiots everywhere.

Hits (in no time at all) 1,809,456 and rising. This is drivel and demeaning drivel too. Why should anyone care? Why is the brain dead dimwit press obsessed with this rubbish? Think I lie down now ...
Posted by white rabbit at 23:19

With the desmise of newspaper reading, it's the only way they can sell newspapers. No one reads newspapers nowadays(with exception of rabbits - I just saw on facebook a photo of a bunny reading a daily rag so I know it's a fact).

I am so happy I'm in YOUR universe, Rabbit.

It's really stupid that she's even made a video. I mean, "We were serious, i smoked his pole, blah, blah, blah..." Big deal! Stupid.

Think I lie down now, too.

I Agree .It's all depressing crap.Leveson should call her and give her a good dressing down.

I haven't heard of any of these people, although X Factor sounds familiar. This is why the world is in the state it's in. People care more about celebrities and their sex scandals than they do what's happening around them.

i think i almost understand less about this (if that were possible) after your explanation. cheers. you're practically a public service. rabbit on demand.

vast silence from the bbc about the fight to derail the health service bill and the fight against the destruction of the publicly funded civil regime by the laspo bill.

part of my word verification is 'erfarter'. it said fart. tee hee.

I try to avoid pop culture at all costs.

"an intimate moment" ... the most hideous of all euphemisms. :-\

In the States we have our own version of this. Lindsay Lohan's an example.

hey rabbit! you havin a loooong lie-down or what? we miss you and your essential updates on popular culture.