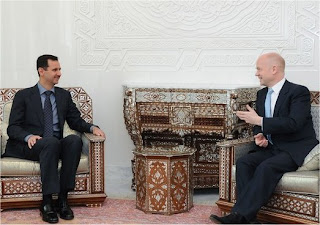 Foreign Secretary William Hague denounced the Syria regime as 'murderous' in the House of Commons yesterday.﻿ Above is a recent study of Hague giving Syrian tyrant Bashar Al-Assad a stern ticking off as regards the latter's state as instrument of murder. Hat Tip to Old Holborn. For the sake of completeness, and in the interest of political balance below is former prime minister Tony B. Liar showing the now deceased Libyan dictator how all right minded people held his similarly murderous kleptocracy in contempt. 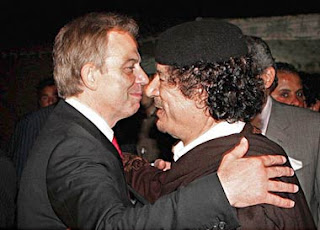 Wasn't Tony the Weasel a Tory?*

No, he was just a weasel who pretended to be Labour--kinda like the US Dems.

*Note that Alan B'Stard switched parties to Labour given that Labour out toried the Tories.

Hmmm. Everyone looks chummy, to me.

Laci - Hmmmmmm ... One day I must do a blog on the uselessness of the Labour Party - a lack of groundedness in anything worthwhile that made it prey to a charlatan like Blair.

Sybil - don't they just. You may be on to something there ;)