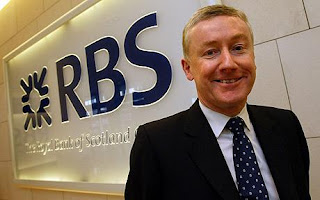 For overseas readers and the terminally inattentive, the above person is named Fred Goodwin. Until yesterday, he was Sir Fred Goodwin but had the 'Sir' bit removed - or 'cancelled and annulled' by some body no-one has ever heard of before - the 'Honours Forfeiture Committee'. Previous persons relieved of honours include Mussolini, Ceausescu and Mugabe.


The rabbit will expend few words on Goodwin, a particularly unattractive individual. In brief summation, he also as a banker with RBS (the Royal Bank of Scotland) had the title of 'Fred the Shred' due to his aggressive asset stripping techniques. American readers: think Mitt Romney minus the effusive charm and social conscience. He over-reached, notably in the takeover of Dutch bank ABN-AMRO and in 2009 Goodwin presided over a loss of £24.1 billion - the biggest in British corporate history. Cue imminent collapse of RBS and with it the British banking system.


The net result was an inevitable Government bail out - the alternative being presumably an economic system based on barter with bright coloured beads - with the result that RBS is now 87% owned by the public. The result for Goodwin was a huge pension (despite huffing and puffing from Government circles about 'no reward for failure') involving him trousering £703,000 per annum (that's $1,113,046 a year to get by on, American readers). Oh and he had add on benefits. Naturally. Like for example a £2.7 million tax free lump sum). After a public outcry, Goodwin's pension was reduced to a mere £342,000 per annum).


Cue the next public outcry. The current head honcho of RBS, a person named Stephen Hester, was about to be paid a 2011 bonus falling just short of £1 million. For exactly what reason remains obscure and it will be called that the public have an 87% stake in RBS since riding to the rescue following Goodwin's depredations. Cue general outrage. The Labour Party in a rare example of it showing signs of having a spine, was prepared to take the topic of the bonus to the House of Commons and force a vote.


The government wouldn't have liked that.


Surprise, surprise. On Sunday last, Hester graciously announced he would waive the bonus. Not that he was leant on by a government horrified at the idea of being seen voting for bankers' bonuses or anything like that. Oh no...


So two days later, Goodwin is stripped of his knighthood (given for 'services to banking' as you ask). Now the rabbit views the honours system as nonsense on stilts but there is a distinct whiff of convenient scapegoating in the timing of this. It's always easier to go for gesture politics calculated to make the government look good as opposed to actually addressing the substantive issues isn't it 'Dave'?

Finally, the rabbit was amused to Learn of Leanne Wood, a member of the Welsh assembly. Ms Wood - she being like the rabbit of republican opinion - called a person often described as 'The Queen' as 'Mrs Windsor' in the Welsh Assembly. Some Labour sycophant complained and Ms Wood (a Plaid Cymru - that's Welsh nationalist for overseas readers - member)  was ordered to leave the chamber. As can be seen below.

Do they just knight any dillhole over there?
:)
That's hysterical about "Downtown". Makes total sense, though!

knighthoods. my feelings are so complex that, without committing to a vast analysis of the entire steaming heap of turd, i can only represent them by using the phrase: 'who fucking cares?'.

After the incompetent and bullying Goodwin, perhaps the UK will eventually get around to removing from the House of Lords peers who have committed fraud, perjury and other serious crimes that resulted in sentences of immediate imprisonment.

Well, count me as one who didn't know you could "lose" your knighthood! And Mick Jagger has kept his? Who'd a thunk it?

I have just installed iStripper, and now I can watch the hottest virtual strippers on my desktop.