Tree of Life and Murdoch

The rabbit hadn't intended to see Tree of Life last night. He and companion had hopped off to Greenwich Picture House intending to see Potiche but discovered to our consternation that it was sold out. There were a few tickets left for Tree of Life - a film that had only vaguely registered at the margins of the rabbit's consciousness and as his companion was determined tos ee a film having thus far Tree of Life it was - via a quick Vietnamese meal.

To be fair, there are points to be amde in favour of Tree of Life:

The opening scenes suggestive of creation are visually very striking. Technically it's good - as in very good.
Some of the portrayals of stifling American domestic life in the 1950s are acutely observed with rather good little points of detail.
It's always good to see Sean Penn.

It broadly goes like this. The opening quote from the Book of Job raises the stakes high. 'Where were you when I laid the earth’s foundation...while the morning stars sang together and all the sons of God shouted for joy?' Then a strange flame like something appears - and reappears later in the film on more than one occasion. Now a good movie with a spiritual  - for want of a better word -  theme is, though difficult, presumably entirely theoretically possible. But if you're going to go into such problematic territory, you've got to be good. This is all over the place. In fact I can't think of an example of where Hollywood has really carried off such a theme, principally I suspect because they are too worried about offending anyone by making too clear a statement and the inevitable result is fudge. The ending - I won't give anything away - is pretty much incomprehensible except to say it involves Sean Penn going through a wholly un-necessary door to wander about with assorted relatives in various stages of life and God knows who else (so to speak) wandering about aimlessly opn a sandbank. Okay - that's a giveaway. Get over it.

The story really starts with the mother of the by then fractured family gets a telegram. Her son has dies aged 19. I assumed in Vietnam as it would fit in timescale terms but I'm now not sure. In fact I later learned that writer/director Terrence Malick's brother committed suicide at a similar age and that there is a strong autrobiographical element to the script. At pouint i felt a bit mean at having taken such a dislike to the film. I forgive myself. It's a ponderous, self-absorbed mess. We trudge througb a 1950s upbringing in Texas. The father of the family (Brad Pitt) is a controlling figure with a belief in his capacity to bend events to his will. Of course in the end events take their own course to his disadvantage and he is made redundant. The family move out of their home. What happened next is a potentially interesting sub-plot but not explored. The sub-text that we are not in control of our own destinies therefore be nice is just about a redeeming feature to the cinematic blancmange that flops around the viewer's ankles. Just about.
It may be gathered that a not very impressed rabbit left the cinema. Oh and being able to take a glass of wine from the bar into the cinema is a good thing (a large Rioja - what else* - in the rabbit's case). The prices - even with a member's discount - were not.

*maybe a Malbec but they didn't have any. 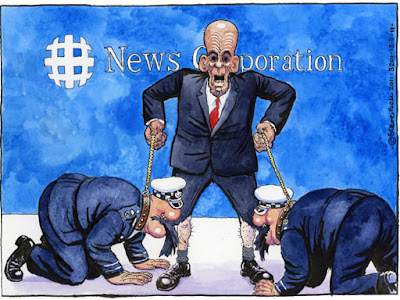 Of course I am frequently asked 'lay some truth on us O wise and all-knowing rabbit, what is your take on the Murdoch thing? You have been pretty quiet on the subject so far''.
Okay, I'm asked no such thing.
The short answer is this: I am of course suffering terminal schadenfreude at Murdoch's present difficulties and the more odium - and damage - heaped on his head the better. Essentially this is because he is the worst sort of bully - the sort that acts on the belief that they cannot be thwarted or checked in any way. They can do anything they like and there is no power on earth to stop them - they are above the law and above the constraints that make the rest of us more or less behave despite our own worst instincts. Anyone and anything that opposes them will be crushed - an individual expressing opposition will be browbeaten - usually by character assassination. A business opponent will be taken out by any means required. Political figures will be cowed and reduced to courtiers and supplicants. Public opinion will be bent to suit the Murdoch corporate interest - an interesting example is the rabid Europhobia of the Murdoch titles - a product of the fact that he plainly recognises the EU as too big and too unbiddable to bend to his will. The inevitable result - the endless torrent of abuse of the Murdoch titles.
The public probably views the hacking of celebrities' phones as naughty but not hugely reprehensible. But when the Murdoch press hacks into the mobile phone of a teenage murder victim, deletes messages to make space for more messages and thus gives her relatives false hope that she is still alive by virtue of the activity on her phone then phrases like 'low life' fail to begin to do justice to the repulsiveness of a culture that plainly - until recently wonderfully disabused - believed that it could do anything it liked and there was nothing and no-one to stop it.
Posted by white rabbit at 19:15

On Le Show today, Harry Shearer was unimpressed with Murdoch's head in hand apology to the young girl in question's parents. He played a song which I believe is entitled, "Don't get too close when the crocodile cries".

I am curious as to how much influence Murdoch has had in US Politics. I've pointed out that he was on the board of the Libertarian Cato Institute and News Corp is a sustaining supporter of that institute.

Murdoch has manipulated not just the news but the news landscape of the United States for decades. He has done so by pressuring the Federal Communications Commission and Congress to alter the laws of the land and regulatory standards in order to give his media conglomerate an unfair advantage in “competition” with more locally focused, more engaged and more responsible media. It’s an old story: while Murdoch’s Fox News hosts prattle on and on about their enthusiasm for the free market, they work for a firm that seeks to game the system so Murdoch’s “properties” are best positioned to monopolize the discourse.

Not to mention that Faux News has been quite influential in peddling the non-sensical "Tea Party" movement.

Where's Beau Bo D'Or when we truly need his services?

I had to quote one of your paragraphs in my post on Murdoch.

Murdoch is a bit like Hitler in that he wanted the world--now his thousand year reich is crumbling and perhaps democracy will replace it.

BTW, do you remember Chris Mullen's A Very British Coup about the lefty Sheffield MP and how the right wing press (among others) worked to bring him down.

Man, I loved that Crocodile song that Harry Shearer played. It sounded like he wrote it. Did anyone record it, or know where to find it? I'd love to hear it again.

I haven't listened to Le Show in a few years, but Shearer does archive his shows.

Little Flower - the words 'sincerity' and 'Murdoch' don't quite seem to go together strange to relate...

Laci - Neil - aka Beau Bo D'Or took some time off. I think he was having all sorts of problems including with the - erm - taxman. He is sorely missed indeed. Yes, I remember Mullen's book - I once met him too. Odd Mullen related fact: he is one of - I think - 300,000 people who still have a black and white TV licence. Presumably his Sheffield character mutated into the execrable Blunkett!

Sybil - thanks for compliment you smooth talker! I didn't confine myself to one drink. It's just you are allowed to take a drink into the actual showing and I chose a Rioja (it's a lawyer thing - Rioja I mean)

Nick - welcome to my humble blog - help from Laci below as you will have seen!

Hey, I downloaded the episode. Thanks guys. If you didn't hear it, here's the song: http://www.mediafire.com/?cdze9oa8ppqid78