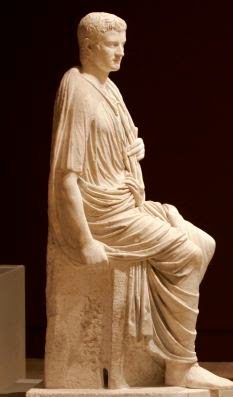 Here follows a couple of stories which have amused the rabbit. Above is the Roman Emperor Caligula (statue of the same from the Louvre), or Gaius Julius Caesar Augustus Germanicus To Mention But A Few to give him his real name. For the classically challenged, Caligula was bonkers even by the standards of the Caesars and noted for unfortunate activities such as sleeping with his sisters, turning the royal palace into a brothel and once, while watching some games, throwing an entire section of the crowd into the arena to be eaten by animals as there were no criminals left and he was bored, a point of view I am sure all will readily understand.

The rabbit's favourite Caligula story is that he had his favourite Horse, Incitatus by name, made a Roman Citizen and Senator and planned to have him made consul. Very sensible too. A jolly good sport, Incitatus would apparently invite various dignitaries round for dinner. What happened to Incitatus after caligula's death at the hands of his Praetorian Guard who had plainly decided that eh had got a bit much remains obscure. Robert Graves has Claudius in Claudius The God withdrawing Incitatus' status as Senator as, despite the fact he could find no moral fault with Incitatus, he no longer passed the property qualification but the more likely theory is that he was killed. This may have come as a relief after a life of eating gold leaf, drinking wine and larging it in a purple horse blanket. Oh and Caligula said he was to be revered as a god. Double-oh and he was married to a horse called Penelope.

The topicality of all this is that Caligula's grave has never been found. But there have been developments. A tomb raider was arrested near Italy's Lake Nemi, about 20 miles south of Rome, as he loaded part of a 2.5-metre statue of our man into a lorry. Caligula undoubtedly had a villa nearby, as well as a floating temple and a floating palace. As one does. The statue is thought to be worth over £800,000. Now it has been claimed that the tomb raider has shown Italian police where the grave of Caligula is and excavations are to commence. Some experts, notably Cambridge classicist Mary Beard have expressed scepticism. the rabbit will be keeping an eye on this story. Below is John Hurt totally larging it as Caligula in the absolutely astounding BBC serial I Claudius...

Oh okay, from the same series, here is John Hurt camping it up outrageously as Caligula with the Troggs Wild Thing overdubbed. You gotta admit that the combination works. Enjoy...

Meanwhile in Colombia, all is not well. Some naughty jailbirds (as it were) have been using a carrier pigeon to fly cannabis and cocaine paste into prison. Unfortunately the poor bird was somewhat overloaded with drugs and - well - couldn't quite make it and crash landed just short of the prison in somewhere called Bucaramanga. A case of greed defeating ingenuity. 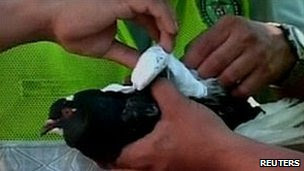 How many of 'em were knocked off by their own Praetorian Guard !!!

I recon the first thing I would have done as emperor is have the guard executed to a man.

everyone round to bucamarunga - i hear there's a hell of a party going down.

Caligula was a nut job. But you have to give it to us Italians: We know how to party.

Caligula is just fascinating, though. Total whackjob with all that power! Did you ever see the series Rome that was on HBO? It was AWESOME.
That poor bird. Still - pretty ingenious of the prisoners!!

Now I must search my house for the film my friends and I made while dancing to Wild Thing decades ago, although it most certainly cannot top Caligula's version. Entertaining and informative post, as usual.

I don't know about eating gold leaf... but I learnt this morning that it is possible to buy edible glitter.
I hope this helps.
Sx

Stephen - I suspect whacking the Praetorian Guard was a bit tricky. Even as Emperor there's only one of you.

SW - Indeed. You may bring the king size rizlas.


JoJo - Complete lunatic but there ya go. Mind you, there are still ruling whackjobs to this day, think Idi Amin, Muammar Gadaffi, 'Emperor' Bokassa, Tony Blair.

Catchy - Now that I would love to see. If you find it maybe see if you can post it???

Someone should have told those drug smugglers that a five ounce bird can't carry a five pound coconut.

RE What Jojo said regarding Caligula, I second that.

Thank youu for sharing this