Custody, Knob of the Week 8 and how the rabbit did better out of Europe than Cameron An update as regards the infamous Croydon Tramlink woman is in order. As the matter is now sub judice the rabbit had better avoid the substantive issue for the time being but one aspect of subsequent events calls for comment.

The Tramlink One - as perhaps we are now to call her is named Emma West. She is 34 and comes from New Addington - a place the rabbit has commented on in comments on original post, albeit less unkindly than as per a site called Chavtowns - Britain's Worst Places To Live (torrent of bad words and worse thoughts alert)- one can only conclude that the Chavtowns writer is a Tourettes sufferer and the rabbit is still pondering the information about the horse.

But back to Emma West - it is little surprise to discover that she has appeared Croydon Magistrates' Court charged with what is described as a racially aggravated public order offence - presumably s5 as SW has observed in previous comments. She was remanded to reappear in court on the 3rd January - in custody. She applied for bail but was refused for her own protection. She has now (last Tuesday) been granted bail but the original remand in custody has attracted little comment - cases with an unattractive racial or sexual dimension tend to result in an instant failure of the liberal instincts of the otherwise ostentatiously liberal. I have only had one client (ever) who in the face of an objection to bail 'for their own protection' was not anxious for bail despite the alleged risks and he didn't apply for bail. Online death threats were apparently made in Emma West's case - one may wonder if they were so serious that they over-rid the presumption of bail that follows from the presumption of innocence - a presumption that even applies to unattractive people doing/saying unattractive things! To post something threatening on the internet - presumably under cloak of anonymity - is one thing. Seeking to effect homicide in real life is another. The distinction doesn't take too much working out. I can only doubt that la West should ever have been remanded in custody in the first place. 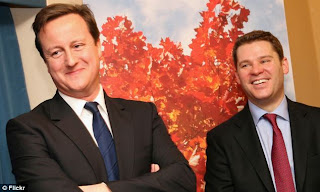 The moon faced Tory twerp to the right above (as opposed to the moon faced Tory twerp to the left of whom more later) is named Aidan Burley. He is Conservative MP for Cannock Chase and latest winner of the prestigious White Rabbit Knob of the Week award. Burley is not facing criminal prosecution and is not and has not been in custody (okay, I don't say he should be but the contrast with Emma West is irresistible).

Burley attended a stag do with 12 friends in at the restaurant in the ski resort of Val Thorens in France. Bad behaviour - indeed seemingly criminal under the French penal code - ensued. Burley was unwise enough to be present - and indicating no dissent -  while another guest, sitting beside the MP at the restaurant, was caught on film making a speech in which he said: ‘Let’s raise a toast to Tom for organising the stag do, and if we’re perfectly honest, to the ideology and thought process of the Third Reich.’ 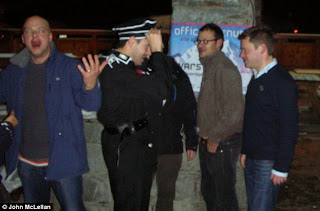 The point is not that Burley actively participated in any of this behaviour or dressed up in SS uniform (as two of his party did - Burley is the one on the right - so to speak - above) ) but that he acquiesced in it - indicating no dissent at all. What happens next - which may include criminal investigation in France - remains to be seen. The rabbit will keep a beady eye but in the meantime a Knob of the Week is the least that can be done in recognition of his role.


As regards the other moon faced Tory twerp - the rabbit won £2.80 (two balls correctly predicted) on the Euromillions lottery last Friday, thus bringing back £2.80 more from Europe than Cameron did. 'Nuff said.
Posted by white rabbit at 13:15

Revelations about knob of the week’s behaviour at Oxford – they have appalling judgment as to admissions – are expected.
Congratulations on doing better than Cameron in Europe. I got a packet of paprika in Hungary, so that makes two of us who've got more out of Europe than his pandering to the xenophobes did.

Aiden Burley just LOOKS like a knob. A ball-less knob, as apparently he is.
How is it fun to go around, pretending to love Hitler and intimidate people? What a bunch of douche nozzles!

I wonder if Emma West even understands why she's in jail? She seemed completely crazy, as in, not even aware that she was so completely out of line.

Eh. I'm glad you made out well this week.

Don't take so long for your next update! You're missed when you do. :)

Knob of the week Burley has now been sacked from his Ministerial Post. Well done WR.

A French prosecutor has now launched an inquiry into the behaviour of people at the party that knob of the week attended.