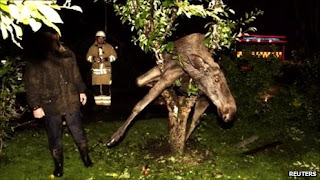 The rabbit would like to apologise for recent blogsilence which is due to his life having been taken over by a huge conspiracy to import cannabis case. The case continues for probably another two weeks but normal rabbiting will be resumed as soon as possible. In the interim, here is a jolly story from Sweden to keep readers going with Hat Tip to Mahal and BBC news.﻿
"A homeowner in southern Sweden got a shock when he found a drunken elk stuck in his neighbour's apple tree.

The animal was apparently on the hunt for fermenting apples when she lost her balance and became trapped in the tree.

Per Johansson, from Saro near Gothenburg, found the elk making a roaring noise in the garden next door.
He called the emergency services, who helped him free the boozed-up beast by sawing off branches. She spent the night recovering in the garden.

The next day she took herself off into the woods with her hangover.

It is not unusual to see elk, or moose as they are known in North America, drunk in Sweden during autumn, when there are plenty of apples about.

Other residents of Saro had seen the elk on the loose in the preceding days.


Mr Johansson said the elk appeared to be sick, drunk, or "half-stupid", the Associated Press reported".

Good luck with the cannabis case. When are people going to stop criminalizing weed? So stupid.

Two drugs used by society for "recreational purposes". In one case, sort of unintentionally. The other most intentionally. Or perhaps intentionally in both cases, the deer just doesn't have the ability (or legal liability) to address the issue for herself.

I will endeavour to answer Sybil's question in that there is far too much money involved in the illegal drugs trade for it to be decriminalised or legalised, no matter how sensible that might be. Even if the money is not derived directly from the drugs trade, there are the other associated "services" that are involved banking (legitimate bankers do launder money), enforcement, the criminal justice system, etcetera.

Personally, I am against the drug war,but know full well that I would have to find a real job if it were ended.

I hope the trial is progressing well.

Yeah i was gonna say, it looked like a moose to me, not an elk.

What? and put all the legal community out of work?