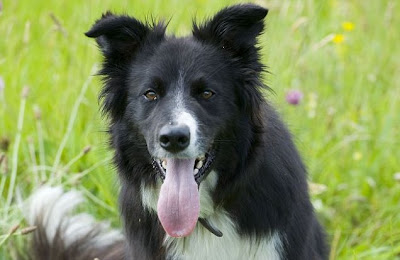 The above four legged fellow is named Ci (no, I don't know how his name is pronounced either - Sy?). Anyway, Ci is a sheepdog in the west of England. Except as a sheepdog, he's rubbish.Why so? I hear you cry. Because he's scared of sheep, that's why. Apparently sheep, despite their reputation for being - well - sheepish can be quite aggressive and if they sense that they have the upper hand will gang up. They gang up on Ci, sensing his fear, and he backs off. Like soooooooo...... Notice how the sheep look well in control. Unlike Ci. His owner wouldn't swap him for the world despite the fact that she has to be her own sheepdog. Another heartwarming animal story from rabbit central.

﻿The rabbit has been following Glastonbury from the comfort of his armchair rather rather than in the middle of a pile of mud with Wayne Rooney for company (apparently the egregious scummer and Colleen are doing Glasto this year accommodated in a £100,000 Winnebago). Last night he caught Mumford and Sons (yes I know it's Mumford & Sons but embed can't cope with the ampersand), of whom he was generally aware of Mumford & Sons as a folk rock type band of some recent note but no more. Instant conversion! They are good! They are better than merely good. The rabbit is a total fan. Here are the rabbit's new heroes with Winter Winds
By way of contrast as regards the rabbit's estimation, after mature reflection the rabbit concludes that it is inevitable that Wayne Rooney (below before and after hair transplant) should be awarded the third rabbit Knob Of The Week award in succession to Grant Shapps and 'Cranmer' for (a) turning up at Glastonbury in a Winnebago (b) being a scummer (c) being himself.
Finally a plea to all readers of goodwill. Fellow blogger, actress and all round sweetie Jessica Harper has entered the Next Model Competition 2011. Jessica just wants to come in the top 250 but languishes at the time of writing at 721. Be good sports and vote for her! It only takes a few seconds and voting ends in a couple of days. In a way, it's a kind of experiment. Let's see if the power of the blogosphere can create a flashmob in support of Jessica. There's nothing to say that you have to be UK resident to vote and there are only 2 days left for voting. Go on - vote for Jessica - and tell everyone you know to do so too. Let's move her up the rankings!

I too was impressed by Mumford & Sons. A good warm up act for U2.

Thank you White Rabbit this is a really lovely blog plea. Very kind and I appreciate it greatly.
And on the subject of Mumford and Sons. WOW! Love them. They were indeed a good warm up act. :-) Really good infact!

Goodie, I can put all my e-mail addies to good use! If they don't check my ip address, then I'll switch to my VPN!