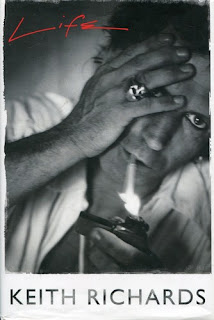 Okay, lets start with a review. The rabbit has just read the less than imaginatively titled Life by Keith Richards - or more accurately by Keith Richards with James Fox, a journalist acquaintance of his. Which is okay. Unsurprisingly it reads like spoken reminiscences, surprisingly for those of a cynical bent, Keef not only remembers but also makes a good raconteur. He actually succeeds in making the reader like him - a kind of guarded, qualified liking but a liking nonethelesss.

Some of the best bits are his early years, before he became famous and in particular being brought up in Dartford. For those fortunate enough to be unacquainted with Dartford, it is just outside London on the Kent side of the Thames estuary and it is a dump.'Everyone in Dartford is a thief'' explains Keef. Uh-huh. The rabbit had the dubious 'pleasure' of going to the Dartford Magistrates Court regularly as a baby barrister and it was full of them but I digress.

One of a  number of redeeming features of the ageing bad boy is that he is plainly and genuinely in love with the music. This produces occasional delicious little gems such as the information that the Bo Diddley riff is called 'shave and a haircut - two bits'. Do try this one at home. It works. Verbalised it becomes 'Bo Diddley Bo Diddley, have you heard? My pretty baby said she was a bird'. There is of course a lot of that sort of thing about...

Many years ago the rabbit went to see UB40 live (no, I don't know what came over me either). they were backed by Bo Diddley. He completely stole the show and ripped the place apart. Pure quality but I digress again.

Back to Richards and the early years, one delicious little piece of information that appeals to the surrealist in the rabbit is that the early Rolling Stones would sometimes play Popeye the Sailor Man in concert on the grounds that no-one was listening and they couldn't be heard anyway because of all the screaming. The Stones' groundbreaking record contract with Decca was secured after an audience with the then chairman of Decca, one Sir Edward Lewis, who was drooling through the meeting. Not drooling over them but literally drooling. I suppose he secured a pretty good deal from Decca's point of view, drooling notwithstanding.

Of course the drugs figure prominently in the narrative. Through the seventies he was a heroin addled mess. His then girlfriend Anita Pallenberg didn't help. She was a bigger mess. She indicated her intentions towards him by giving him a blowjob in the back of a  car. Some people shake hands... He was lucky not to go to prison and, if he tells it like it was, hasn't touched heroin for about 30 years. This may surprise many people - reputation can proceed before you - but I'm inclined to believe him. He also deals with a number of other urban myths (the Mars Bar - false), the total blood transplant (false), snorting his father's ashes (true - sort of). A lot of the musical stuff is actually fairly technical. i didn't for example know that he dispensed with one string on his guitar and plays with 5. You want an explanation - read the book. It's technical.

The one false note he strikes is in dealing with Altamont. For young people and the otherwise uninitiated, the cliche about Altamont is that if Woodstock was the dream, Altamont was the nightmare. In circumstances that remain controversial and there are a number of (I suspect) self serving narratives, Hells Angels ended up in some sort of security role - for free beer. Drunk and off their faces on acid and amphetamines the Angels were at the core of an increasingly violent atmosphere. Monty Balin of Jefferson Airplane was attacked by an Angel while performing and the Grateful Dead refused to perform because of the violence and left. The Stones did perform. One may wonder why. The defensiveness on this question comes through very clearly on Richards' incomplete narrative of the event. An 18 year old named Meredith Hunter is on film trying to climb on the stage and pulling a revolver. He was then stabbed to death by a Hell's Angel named Alan Passaro who was tried but acquitted on a defence of self-defence. The question remains. Why did the Stones play in this context (they didn't actually know of the killing at the time but did see the violence at close quarters (Jagger was attacked before he even performed). Richards in terms says that not performing would have served no purpose. If Nick Kent (his Apathy For The Devil reviewed by the rabbit whenever) is right, it was about money. The Stones had paid a substantial sum to have their performance filmed. They were going to get their moneysworth. Grubby as that...

The Stones did end up something of a corporately sponsored monstrosity. Let it be remembered that before they were sponsored by Coors etc they were once a very decent rythmn and blues band. As is demonstrated here...

Otherwise permit the rabbit a little digression on matters footballing. The rabbit went to see Leeds lose at Crystal Palace yesterday with the larger of the small rabbits, who, being of an analytical bent commented how Championship players are generally unreliable and lacking in ability compared to the very top players. It is true. Leeds were awful and Palace were worse. It's just that Palace nicked an early goal and then defended like an away team. At several points all 11 Palace players were in their penalty area. The best player on the pitch was the goalscorer - a man previously unknown to the rabbit and named Neil Danns.He scored the only goal, generally ran his socks off and got sent off two minutes before time for a moment of overenthusiasm which earned him a second yellow. He's out of contract in the summer. 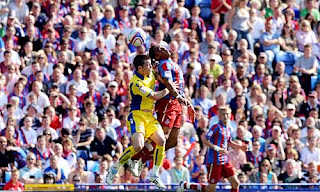 Danns is on the right in the red shorts for the footballingly challenged. At least he lasted 8 minutes longer than the character on the row behind the rabbit who spent 80 minutes abusing his own team's players in a highly unoriginal manner. The repeatable word was 'silly'. All other words began with 'f' or 'c'. He then left with 10 minutes to go and his team 0-1 down. The Leeds obsession with matters Manchester manifested itself as usual. Man U supporters - characterised as 'scum' - are merely glory supporting twerps from the leafier parts of Surrey. The real scum are the Millwall supporters who recently produced an array of Turkish flags to mark the anniversary of the fatal stabbing of two Leeds supporters at a game in Turkey ten years ago 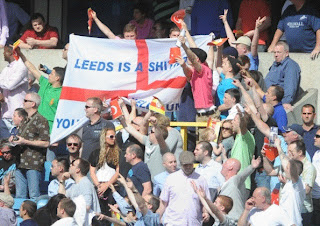 Gloating over dead young men - althogh not uniquely wicked in terms of things done by football 'supporters' - well words fail me..
Yesterday was rounded up more sedately by going to the Comedy Theatre to see the distinctly non-comic The Children's Hour starring Keira Knightley and Elizabeth Moss (of Mad Men recent note). Pausing to wonder what either - let alone both - were doing in a not full not very big theatre, I have to say it didn't quite work. A rabbit theory - cinema (being essentially visual) stretches out dialogue, theatre (being essentially verbal) compresses dialogue. This does not work very well when seemingly just about every line is delivered in an angsty shout. Keira Knightly was fascinating, though. Every movement - even the smallest - seemed to have been weighed to an exactitude. Nothing was out of place, seemingly not by a millimetre. At least that was amazing to watch. 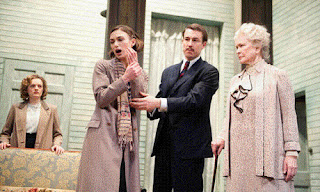 Welcome back. It was well worth the wait for this long post full of interesting information and well-written prose.

Glad to see you, Rabbit!
I love Keith. I mean, the man truly is a human cockroach - he's/ they've done some bad things, but man - still living is a true miracle for him! Plus, I just love the Stones.

Keith is so gross. Really, really gross. Or as my soon-to-be ex husband would say, "how'd you like to see him greased up and comin' at you in a Speedo?" Yes, that's quite the visual.

BTW, don't mean to be an annoying spell checker, but it's Marty Balin, not Monty Balin. ;)

Wasn't it Jerry's or the Dead's idea to utilize the Angels at Altamont?

BTW, I had to make my blog invite-only. Will try to dig up an email addy for you so that I can send you an invite. You can read why once you sign up.

Same About Leeds but,at least, it means I can watch West Ham there next season.