return of the rabbit 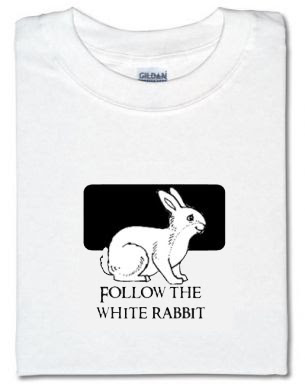 I don't really like blogging as confessional stuff but I guess an explanation is in order to the kind people who have left messages during my period of absence, for which many thanks. Okay, it goes something like this...

2008 was an - um - interesting year. As is relevant, events start in February when I was red carded out of marriage. I'm hugely not going there as to why - not that there is anything scandalous or even exciting to tell - sometimes things just run their course and I was and remain fine about it. 'Nuff said.

The practical effect was that the house needed to be sold because of the seperation and because the (not exactly tiny) mortgage had come off its discounted rate and financially it was all getting too much - that's like literally too much. Now in 2007, this would have been a doddle. Name a monstrous price, form an orderly queue, no pushing at the back and no offers. The house would have gone in days. But that was then and just before - as we were fond of saying in my youth - capitalism collapsing under its own contradictions. We had an offer. The guy totally gave us the runaround. I don't know what he was playing at but end up concluding that he was never serious about buying the house in the first place. This went on for months as the wheels came off the financial wagon. In the end we accepted a second offer - lower but still okayish. This was from a couple who were as present as the original bloke had been elusive. It seemed they were round every ten minutes with builders etc. They had to complete by early September so as to get the building works completed in time to move in by Christmas. So far so good.

Then the couple announced that building works would be more expensive than originally expected and wanted to drop the price by £20,000. Over a barrel and desperate to sell we agreed. Things dragged on. The previously very - in fact irritatingly - omnipresent couple went to ground. In the end they resurfaced with a last minute reduced bid trying to slice a further £60,000 off. The by then divorcing rabbit and wife were as one on this one. They could fuck off and die. But what do do? We desperately needed to sell. The estate agent came up trumps - it must be said that contrary to the general reputation of estate agents he was a nice guy - he got punting on the phone and found a developer. The developer visited the house on the Wednesday, made an acceptable offer, and instructed solicitors on Thursday and exchanged on Friday. One week completion. The reaction of the generally annoying conveyancing solicitor was comic when told of this timetable. 'But they'll have to raise enquiries' he said weakly. 'These are developers' I explained patronisingly. 'They don't do that'. They didn't either.

In the interim, I'd put a deposit on a rather nice rented flat with two rooms - one for me and one for the (now adult) children for whenever they wanted. Some friends agreed to put me up for a couple of weeks until the flat became available in mid-October. My furniture etc would go into storage for a short period. So I was outta there on the Wednesday before the Friday (do keep up at the back) and installed with friends in Dulwich.

Then things went radically wrong. Because my credit rating by then sucked bigtime I needed a guarantor for the rent in the flat. A digression: if the government wanted to do something genuinely popular as opposed to endlessly bossing us about they would cut the credit reference agencies down to size (preferably very small indeed) and make the banks do their own dirty work. They won't. A friend agreed in principle to be guarantor but when he saw the guarantor form threw a wobbly. It was, it must be said, a very intrusive form and in particular wanted his bank details in full. Not unreasonably, he didn't want to give anyone and everyone with access to the form his bank details.

'Ever heard of identity theft?' he asked. This was fair enough.

So that was that. Flat fell through. I couldn't stay at the place I was at more than a few more days, which was fair enough too.

Another digression. Shortly after I moved out of ex matrimonial home and before becoming prospectively homeless, I met Charon QC (see link to left) for a very congenial evening's drinkies in Chelsea. As the trains from Sydenham Hill (nearest station to where I was staying) were - as I discovered on arriving at the station - not functioning (usual ballsaching reason: planned engineering works) had to get a cab back from Brixton, the nearest point on the underground to where I was staying. I came out of the tube and stood on the nearest traffic island on Brixton High Street. A dodgy looking bloke shuffled up to me.

'No thank you' I replied.

There was then a pause for thought on dodgy looking bloke's part. A process I suspect he found problematc.

'No thank you' I replied again.

Then he just stood and stared at me.

'Have a very good evening' I said, distinctly insincerely. He took the hint and shuffled off.

Anyway, there I was imminently homeless. I rang a friend about something completely different but at the end of the conversation, told him I was homeless.

So I moved in with him for the rest of the year. It was a lifesaver. There is homelessness and homelessness and an en-suite in a gated estate in Beckenham is pretty good as homelessness goes. The guy from the first place I stayed at drove me and a pile of possessions (loads of stuff in carrier bags, partly because the Polish guys who packed for me and moved my stuff to storage packed away a big suitcase I meant to keep and partly because you accumulate all sorts of random stuff living like this) over. When we got to the gate he asked me.

'Should I tell them I've got a homeless person with a load of carrier bags here?'

'Best not to' I replied.

I got to like Beckenham and was very well looked after. My host eventually said to me:

'You can stay here as long as you like but you'll never get your life back until you've got a door you can close behind yourself'.

I found letting agents who didn't want to have the guarantor's banking details, give him a rectal probe or anything alarming like that. They found me a flat in Balham (apologies to those not familiar with the geography of South London). I moved in on the 30th December. Or rather I almost didn't. I arrived with keys and Polish removal guys only to discover that there was a deadlock to the front door I hadn't been given a key to. Eventually a neighbour appeared, let us through to his back garden and provided a ladder one of the Polish guys climbed over, into the back garden and opened up the flat via the garden door, which I did have a key to. The flat is fine for my present purposes and is wonderfully well located for tube, shops, restaurants, bars etc.I haven't spent much time there as I've been working in the Midlands mostly and pretty much flat out workwise, which is good.

This is all very well, I hear you say, but why no blogging? Well, just after my last posting whenever I tried to go online I bluescreened out. After this happening several times I contacted Dell. They ran a test. 'It's your hard drive!' they exclaimed. Don't even try to log on or you'll create huge problems for yourself. My itinerant lifestyle meant that it took me forever - okay until last night to finally resolve the programme. I had my lappy checked out - nothing wrong with my hard drive. Updating and de-fragmenting in order but that was it. I collected lappy and tried to log on. Bluescreened out again - this was last night. Then I tried the simple expedient of restoring Internet Explorer. Problem solved...

So that's plenty enough about me. Normal service hopefully restored. I'm now officially divorced. Apparently you get a certificate - which is nice - but I haven't got it yet. I'm quite content and, as Scarlett O'Hara observed 'tomorrow is another day'.

That's all very well, I further hear you ask, but where do you stand on Marmite?

Have some Dead - Franklin's Tower for no particular reason apart from why not...

Wow. I figured something must be going on, but I wasn't expecting this.

Hang in there, man. And welcome back!

I was just wondering yesterday where you were hiding. Sounds like a hell of a run around, but at least you're in your own place now. If I was there and not here, I'd take you out for a beer.

Thats one hell of a tale, Mr Rabbit. Hutchless, bunnyless, and at one point nearly carrotless.

Should the need ever arise, should you ever need assistance or accommodation in the far North, contact me.

The Rt Hon Charon has my private email address to hand.

A very sincere welcome back.

Welcome Back, Andrew. I recently had a private email exchange with the Law Minx, as I was concerned about your disappearance from the blogosphere and contacted her to see if she knew anything about what was going on with you. She didn't, but assured me that you were probably just tied up. I'm glad that you are back. As we say here, hang tough!

but how was the play, mrs lincoln?

nice to have you back, bunny boy.

An excellent post - we spoke t'other day... good to see you back in the blogging world. We shall drink soon and talk of many things etc etc....

I shall Google South London and check the aerial photos out!

I got a poor quality photocopy from the court a week after the event. It came in the same post as a letter informing me that I had been done for speeding .. I think you can guess which saddened me more :O))

Thanks to all for kind thoughts and for the offers of beer and accommodation!

SW - the play was the dog's bollocks!

Most interesting non-blog offer I had was from best friend...

'If things really get bloody you can head out to Australia. We can put you up and you can spend six months on the beach'.

hey sugar! thought i'd come around after hearin' about ya'll on ronknee's blog and then seein' ya'll's site listed on darlin jimmy's list...so, hey! (which is southern for hello, how are you!) anyway, ya'll have had one hellva a year and i'm really lookin' forward to readin' more! xoxo

Welcome back, I also started the wealth reduction programme in Feb last year. Have not had the same journey as you but am pleased to hear things are looking up.

PS I do computer IT and know laptops and problems with XP and Vista inside out. Also know something about Linux (Red Hat, SuSe and Knoppix)

Gis a shout if you have any probs.

Did you know that you can make dollars by locking special pages of your blog or site?
Simply join AdscendMedia and run their content locking tool.

Looking for the Ultimate Dating Site? Create an account to find your perfect date.